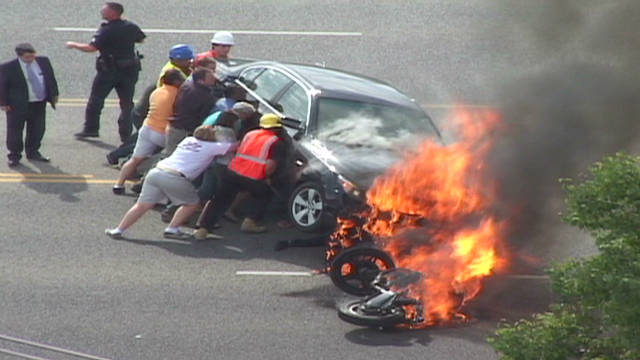 In Utah, passers-by lifted a BMW, dragging an injured motorcyclist out, who had collided with the car.
September 13th, 2011
03:36 PM ET

Gotta Watch: To the rescue

The most popular video on CNN.com Tuesday showed a group of daring citizens who proved that, in the face of danger, the average person can become a modern-day hero. On a busy street in Utah, 21-year-old Brandon Wright crashed his motorcycle into a BMW, pinning him underneath the burning car. Seconds later, passers-by sprang into action, lifting the car and dragging him to safety. Last night, CNN's Piers Morgan spoke to three of the men who saved Wright and got an update on Wright's condition from his uncle.

In today's Gotta Watch, we take a look at other good Samaritans helping those in need as fear subsides and adrenaline takes over.

Close call in canal crash - Last summer, 17-year old Jasmine Gonzalez's Chevy Cobalt careened off a Florida interstate into a canal, trapping her inside. A couple saw it happen and rescued her using the only tool they could find.

'A complete team effort' - In 2009, a mother of two crashed her SUV into a tree. It caught fire, but as luck would have it, two off-duty firefighters were among a group of bystanders who helped save the day.

Subway Samaritan: 'I'm no hero' - Wesley Autry's subway rescue earned him an invitation to President Bush's 2007 State of the Union address. He was also named one of TIME magazine's 100 most influential people. Talk about good karma!