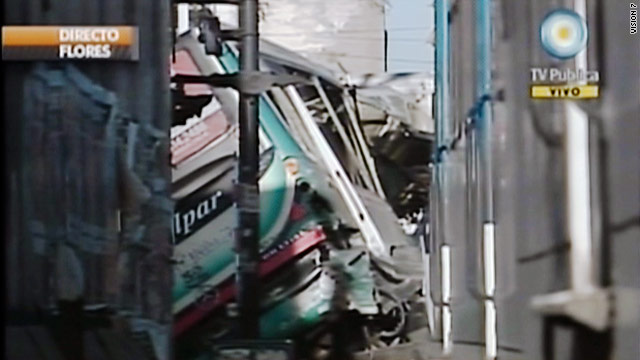 [Updated at 9:35 a.m. ET] At least 162 people were injured in the accident, said Dr. Alberto Crescenti, head of the Medical Attention Emergency System, or SAME.

It took hours to free the remaining victims from the wreck, authorities said.

The cause of the collision was being investigated. Argentina's Transportation Secretary offered one early detail on the condition of the railroad crossing.

"The railroad crossing bar was working fine," Juan Pablo Schiavi said. Officials will also review video from the trains in their investigation, he said.

"There are seven confirmed deaths. There are people in hospital now in very grave state, including children. They have severe injuries," said Fernando Sostre, spokesman for the Argentine Federal Police.

[Updated at 7:45 a.m. ET] About 100 people were injured and two were trapped after a bus and two trains were involved in a collision, police said, according to the state-run Telam news agency reported. Initial reports of injuries were higher.

[Updated at 7:32 a.m. ET] At least six people died in a collision between two trains and a bus in Buenos Aires, the state-run Telam news agency reported, citing the city's fire chief.

About 170 people were injured and dozens more were trapped after a bus and aÂ  two trains were involved in a collision, police said.
A train rammed into a bus at a street-level train crossing, causing the train to derail, where it was struck by a second train, the state-run Telam news agency reported.

[Updated at 7:23 a.m. ET] Some 170 people were injured and dozens remain trapped after a bus and a train collided in Buenos Aires, Argentina Tuesday morning, police said.

Children are among those injured, he said.

Smoking weed may expose you to some of the same toxic chemicals found in tobacco smoke, a new study finds. cnn.it/3qnCUE6
cnni

1:01 am ET January 16, 2021 RETWEET
â€śwarned of a violent scenario in which â€śCongress itselfâ€ť could be the target of angry supporters of President Ttwitter.com/i/web/status/1â€¦cSTGrQCC
susancandiotti