The cornerstone climate measure of Democrats' massive spending package will likely be dropped after pushback from SŌĆtwitter.com/i/web/status/1ŌĆ”9A 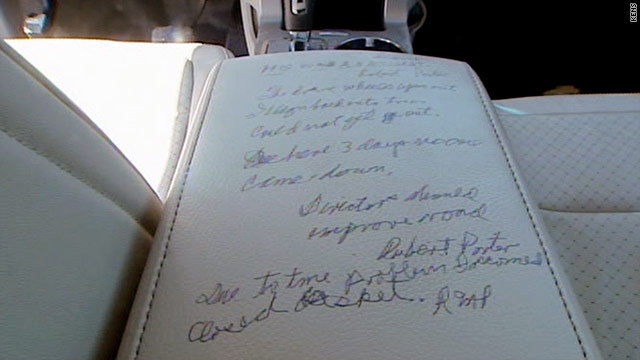 Stuck in a car on a rural Texas road, Robert Porter wrote what he thought would be his final words to his family.
September 13th, 2011
09:37 PM ET

An elderly Texas man who was trapped in his car for two days wrote what he thought was a farewell message on the car's armrest, saying he wasn't trying to kill himself and suggesting the road he was on should be fixed.

Robert Porter, 85, drove his car down a steep rural road near his Kerrville home in central Texas early last week to look at a pond. He couldnŌĆÖt get the two-wheel-drive vehicle back up the soft caliche road, and the car rolled off the path and became stuck near the bottom of a ravine, CNN affiliate KENS reported.

Porter, a World War II veteran who has a back injury and gets around with a wheeled walker, was without food and had only 8 ounces of water in a bottle. Knowing he could last only so long with temperatures in the 90s, he eventually grabbed a pen and started writing on his carŌĆÖs center armrest.

ŌĆ£One thing I wrote, the very first, was, ŌĆśThis is an accident,ŌĆÖ underlined. Because I was afraid somebody might think I committed suicide,ŌĆØ Porter told KENS.

He wrote that the carŌĆÖs wheels had spun out, and he instructed his family to give him a closed casket at his funeral. He also wrote that his homeownerŌĆÖs association ŌĆ£should improve (the) road.ŌĆØ

He told KENS that he was ready to die. ŌĆ£The last six hours, I was asking God to hurry up. You know?ŌĆØ Porter said.

Porter honked the carŌĆÖs horn until the battery died. On September 6, about 40 hours after the car became stuck, a neighbor saw the vehicle and Porter - dehydrated but alive - and called authorities, said Tom Vinger, spokesman for the Texas Department of Public Safety.

Vinger told CNN that Porter would have been unable to walk away, especially up the incline, because of his health problems. A tree near where the car came to rest gave Porter some crucial shade, Vinger said.

Porter said he was going to concentrate on giving more of his time and resources to charity, according to KENS.

9:58 pm ET October 15, 2021 RETWEET
When crude oil leaked into the Pacific Ocean off the coast of Southern California earlier this month, the amount spŌĆtwitter.com/i/web/status/1ŌĆ”uE
cnni

9:56 pm ET October 15, 2021 RETWEET
Masks and outdoor gatherings will still be the best way to make holiday gatherings safe this year, the US Centers fŌĆtwitter.com/i/web/status/1ŌĆ”7X
cnni