An arrest warrant has been issued for a friend of a North Carolina woman who was found dead last month while on vacãtwitter.com/i/web/status/1ãÎQD

Georgia Supreme Court reinstates six-week abortion ban in the state, putting a ruling by a lower court that overturãtwitter.com/i/web/status/1ãÎSN 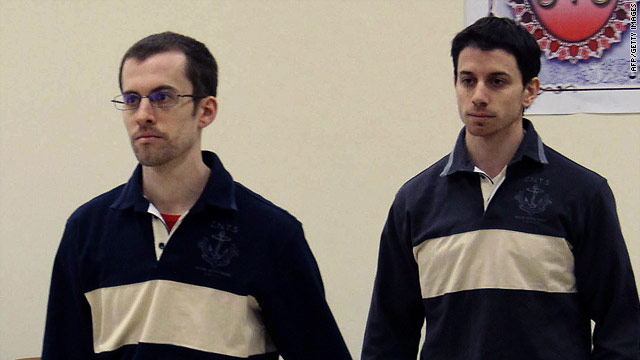 Shane Bauer and Josh Fattal areaccused of spying and are currently being held in a Tehran prison.
September 14th, 2011
03:33 PM ET

An Omani official is en route to Iran to help negotiate the release of two American hikers who have been held for two years on accusations of spying, a western diplomat told CNN.

The official was flying from Oman to Tehran and would be there to help iron out any last-minute wrinkles regarding the possible release of Josh Fattal and Shane Bauer, but it is not yet clear if the hostages are free to leave, the diplomat told CNN.

Oman helped secure the release of a third hiker, Sarah Shourd, in September 2010 after a judge allowed her to be released on bail because of her medical condition. Her bail was posted by Omani sources, a senior Obama administration official said at the time. Shroud said then that she hoped to see her fiance, Bauer, soon.

Earlier on Wednesday the Iranian Judiciary said it was considering a request for setting bail in the case of the two American hikers accused of spying.

The report, posted on Iran's Judiciary website, seemed to contradict a statement by the hikers' lawyer that bail was already set in the case.

Fattal and Bauer would be released from Tehran's Evin prison after a $500,000 bail is paid for each of them, their attorney, Masoud Shafiee, said Tuesday.

Fattal, Bauer and a third hiker, Shourd, were seized on July 31, 2009, after apparently straying across an unmarked border between Iraq and Iran. Iranian authorities arrested them, claiming they were spies and had entered the country illegally.

ãIf you remember last year around this time Sarah Shourd was released with help of Omani government," CNN Senior State Department Producer Elise Labott reported. "The Omanis sent a plane (and) an envoy there to get her out, and then flew out with her to Oman.ã

The US and England finish in 0-0 draw, in just their third match in World Cup history. cnn.it/3F2m8o7
cnnbrk

4:03 pm ET November 25, 2022 RETWEET
An arrest warrant has been issued for a friend of a North Carolina woman who was found dead last month while on vacãtwitter.com/i/web/status/1ãÎQD
cnnbrk