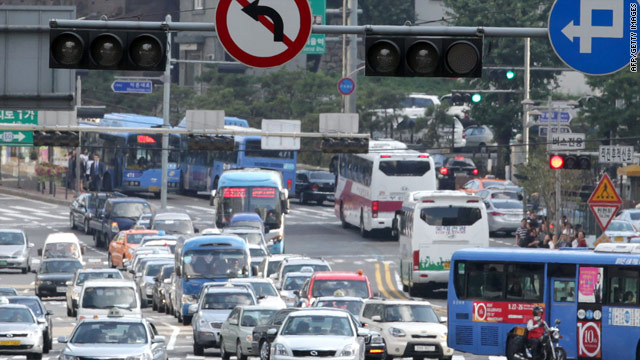 Traffic lights are out as traffic crawls through Seoul, South Korea, during a blackout on Thursday.
September 15th, 2011
08:16 AM ET

South Koreans found themselves sweltering in the heat, stuck in elevators and even without cell phone service Thursday as power outages affected hundreds of thousands of people across the country.

The South Korean Ministry of Knowledge Economy said high demand for air conditioning during a heat wave, together with reduced supplies as power plants were shut down for maintenance, likely led to the blackouts, the country's Yonhap news agency reported.

The country's sole electric service provider, Korea Electric Power Corp., said it was forced to cut off power to hundreds of thousands of customers to prevent the electrical grid from falling below reserve levels that could lead to a nationwide blackout that could take days or weeks to recover from, according to the Yonhap report.

The power cuts led to 100 reports of people trapped in elevators and shut down banks and schools, The Korea Herald reported. No injuries were reported.

Temperatures went as high as 86 degrees Fahrenheit (30 Celsius) in Seoul on Thursday, about 10 degrees higher than average.

"There were many power plants that began their annual maintenance as the hot season passed. Demand was unusually high today while they were preparing for the cold season," a ministry official told Yonhap.

Temperatures in the 80s are expected to continue through Saturday.

90-year-old Geneva Wood was recovering from a stroke when she contracted coronavirus. She says she thought she was‚Ätwitter.com/i/web/status/1‚Ä¶Gf
cnni

12:15 pm ET April 4, 2020 RETWEET
Research shows coronavirus can be spread not just by sneezes or coughs, but also simply by talking or possibly even‚Ätwitter.com/i/web/status/1‚Ä¶cA
cnni