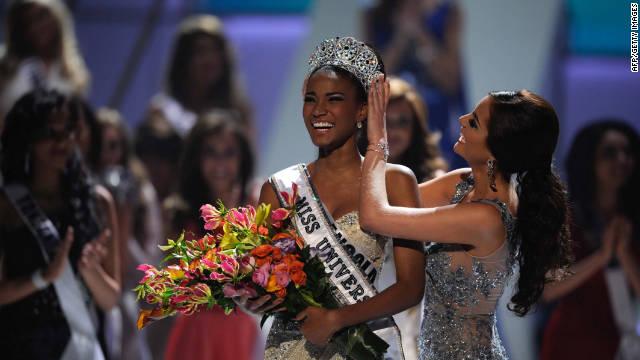 Overheard on CNN.com: What would Donald Trump say?

Dumbest question in the universe

"For one, I'm offended of the Miss Universe pageant, but not because it objectifies women, but because it is discriminatory against women from Alpha Centauri."– nts

"She did well with it, though, didn't she! Stupid question, smart lady!"– twophad

Of all the questions in the universe, why was a beautiful woman like Leila Lopes - now Miss Universe - asked what part of her physical anatomy she would change, asks CNN writer Jessica Ravitz. And who came up with such a question? Many CNN.com readers thought it was designed to be a trick question.

dietetics101 said, "I see nothing wrong with the question. I think true class and grace can only be displayed when the conditions are less than admirable. The person who wrote it was intending it to be a trap, and likely expose a lot of awkwardness. That it did not, is pretty cool."

Kam2010 said, "This question is similar to the 'What do you consider your biggest weakness' question they ask you on job interviews. It is designed to determine how well you would react to such a charged question. I think Miss Angola handled it with grace."

JiceReal said, "Miss Angola's response to a shallow question about looks was an inspirational message to young girls, emphasizing the importance of inner beauty. Maybe that was the intentional test all along."

RAM05 said, "It's a valid question women ask themselves every day when they look in the mirror, when they see how other women are dressed, etc. Maybe women shouldn't worry so much about their personal appearance and focus on cultivating their inner beauty more, but that isn't how society views women, is it? Personally, I think Miss Angola gave the perfect answer."

Rexa said, "The reason the judges can't ask what they want on 'Miss Universe' is due to sensitivity and respect for other nations. If you asked Miss China what she thought about political issues when she comes from a communist country she'd get imprisoned when she returned."

canuckimport said, "I wonder if Donald will say he would like to change his hair?"

AC2012 suggested, "After they make Styrofoam, what do they ship it in? Why did kamikaze pilots wear helmets?"

Nine Swartzentruber Amish men in Kentucky refused to pay a fine and were jailed for failing to display a safety triangle on the back of their buggies. They use reflective tape but see the safety triangle as too "loud" and a "worldly symbol," which they believe indicates the user no longer trusts fully in God.

Some CNN.com readers said they should use the triangle like everyone else. hank said, "This is about safety. You can't see a dark buggie on a dark road. Jim said, "The orange triangle is the universal symbol in the United States designating a slow-moving vehicle. It has nothing to do with religion."

Mick said, "I don't believe in the Trinity either. But I'd sure as hell slap a triangle on my car if required for safety purposes. Sometimes a triangle is just a triangle."

Other readers wondered why reflective tape or a different symbol wasn't enough. Bubba Gump said, "Well, if the gubbmint requires certain things and you do not do them, you pay the cost. You are required by law to have insurance to drive a car; but people don't and when they get caught, they are fined. This is no different. The triangle is for ALL slow moving vehicles. The bright orange is to draw your attention. Maybe a bright orange circle?"

Samuel8614 said, "First off ... I'm not a Christian or Muslim. This country was founded with freedom of religion as a key pillar. I don't see why the state is bothering the Amish. I think if you have a certain total square footage of reflective material then they should be OK."

boogietime said, "Glad Kentucky is busy putting dangerous criminals behind bars. Who knows how much murder and mayhem these guys would have caused if they had not been jailed?"

What said, "They use high quality reflector tapes, lanterns and red reflector lights and you still can't see them? They are not driving on the freeways, for goodness sakes! Choose a shape that is not offensive to their beliefs and leave the Amish alone!"

It's a bird! It's the Borg! No, it's probably a common fireball, said NASA spokeswoman Veronica McGregor. Cyberspace was abuzz Wednesday night about a strange light in the Southwestern U.S. sky, but McGregor said the fireball was an asteroid chunk that became a meteor when it hit the atmosphere. Some CNN.com readers readily agreed, while others remained unconvinced.

Bassman51 said, "There is absolutely nothing unusual about this type of sighting! A fireball on a straight trajectory across the sky is most likely a common everyday meteor! Duh! Get over it!"

steffanpiper said, "I actually saw this thing hit the ground in front of us approximately 500 feet from where we were in Palm Desert, CA. Posted about it last night on FB as soon as I got back not knowing that everyone else saw it as well."

Were there other mysterious flying objects?

coy4one said, "In Houston, Texas, on Wednesday morning at around 3:30 AM, my friend took 20+ pictures of what we thought was a UFO. Came across the sky, stopped for some time, changed shapes, went from one light, to 3-4 lights, and at one time looked like a crescent moon (and it was a full moon that night). I told a co-worker about it; he said that he and a friend saw the same thing around 10 PM on Saturday night. I asked my friend a lot of questions about the pictures and it does not sound like a meteor since they don't stop in the sky. It could not have been the space station for the same reason. The pictures he took are very interesting."

whatdoweknow replied, "I took two photos on September 10 that looked just like that. I was trying to take pictures of the full moon and got odd pictures. This is Michigan, though." Toarn said, "Just another military aircraft being tested. Old news."

Smilinmom said, "I can tell you that movement was not a streak straight across the sky. Look a little closer. Meteors and plummeting satellites don't move like that. Slowing/hovering in one area and then a button hook zip to the left is not one I would associate with those two. Whatever it was, cool."

vintage274 replied, "Ask any astrophysicist, who will tell you that trajectory paths of these things are wobbly at best; they meet with space junk and can be deflected; and there is much optical illusion involved that has to do with dark skies, traveling bright lights, and the human eye. To make more of it is silly and superstitious. Lights course around in our solar system all the time. Meteorites travel close to earth quite frequently."