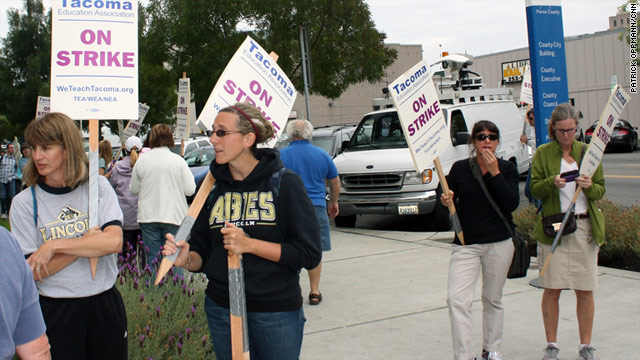 On the Radar: No school in Tacoma, rally for Davis, bill for Anthony

Tacoma school strike: Classes are suspended again Friday in Tacoma, Washington, after teachers voted to continue their strike, in defiance of a a court order to stop.

Rich Wood, the spokesman for the Tacoma teachers union, said teachers voted Thursday to continue their strike despite a judge's Wednesday order. At a union meeting Thursday afternoon, 1,478 teachers voted to keep striking, Wood said, adding that 107 voted "no" or abstained. He said teachers were concerned about how Judge Bryan Chushcoff would react to their defying his order.

The Tacoma School District did not return a call seeking comment, but a message posted on the district's website said school for 28,000 students would be suspended again Friday, as it has been all week.

Davis, 42, is set to be executed at 7 p.m. Wednesday by lethal injection next week for the 1989 murder of Savannah, Georgia, police officer Mark MacPhail.

But since his 1991 conviction, seven of the nine witnesses against him have recanted or contradicted their testimony. No physical evidence was presented linking Davis to the killing of the policeman.

Supporters Thursday delivered a massive petition containing more than 663,000 signatures in support of clemency for Davis to Georgia officials.

They're worried that won't be enough, as all legal appeals have been exhausted and only Gov. Nathan Deal or the state Pardon and Parole Board can call off Wednesday's execution. The board denied clemency in 2008.

Bill for Anthony: Casey Anthony owes authorities just under $98,000 for the costs of investigating the disappearance of her 2-year-old daughter, Caylee, in 2008, a Florida judge ruled Thursday.

The decision means prosecutors are set to recoup less than one-fifth of the more than $516,000 that they had sought. The state had argued that if it were not for the 25-year-old Orlando woman's lies, investigators wouldn't have had to expend the time and money to find her daughter's body.

They searched for five months, eventually finding Caylee's skeletal remains in woods less than a mile from her grandparents' Orlando home.

Orange County Superior Court Chief Judge Belvin Perry Jr. found Anthony is liable for expenses incurred from July 15, 2008, when Caylee was reported missing, to September 29 of that year, when authorities ended their missing-person case and opened a homicide investigation.