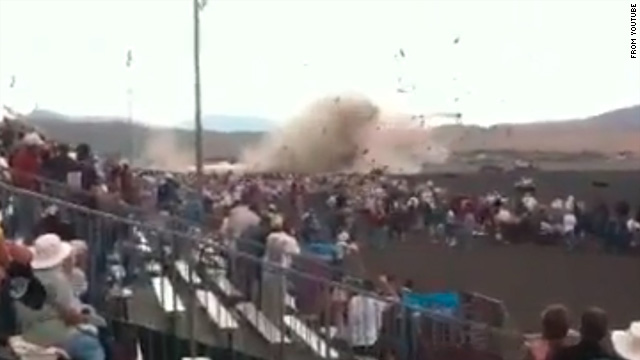 [Updated 10:47 p.m. ET] A Reno, Nevada, hospital said Friday night on its website that it had received a "total of 22 patients," including two who died, after a plane crashed at an air show about 15 miles from the city.

The patients include nine people in critical condition, meaning their vital signs are unstable "and not within normal limits," and 11 in fair condition, exhibiting stable vital signs, according to the 6:15 p.m. (9:15 ET) update on the Renown Regional Medical Center website.

[Updated 8:43 p.m. ET] Officials from the Federal Aviation Administration and the National Transportation Safety Board are on the scene in Reno, Nevada, where a plane crashed Friday in front of a grandstand at the National Championship Air Races and Air Show, a spokesman for the show said.

Members of the National Guard, which were on-site for the show, are also assisting in the response, air show spokesman Mike Draper said.

[Updated 8:41 p.m. ET] "There are people still being escorted out of that area with various injuries," a spokesman for a Nevada air show said early Friday evening, shortly after a P-51 plane crashed in front of a grandstand.

Mike Draper said he's been told there are "likely fatalities" but it has not been determined who they may be, nor whether the pilot of the "Galloping Ghost" aircraft that went down survived.

[Updated 8:39 p.m. ET] There are "mass casualties" at an air show after a plane crashed Friday into an area in front of a grandstand at the National Championship Air Races and Air Show in Reno, Nevada, a spokesman for the air show told CNN.

In video posted on YouTube, emergency responders could be seen assisting spectators at the show, though it was not immediately clear how many were injured. CNN could not immediately confirm the authenticity of the video.

Witnesses told CNN affiliate KTVN  that the plane was about 400-500 feet in the air when it nosedived and crashed. Another witness told KTVN that it appeared the pilot was trying to pull the plane away from the grandstand before it crashed.