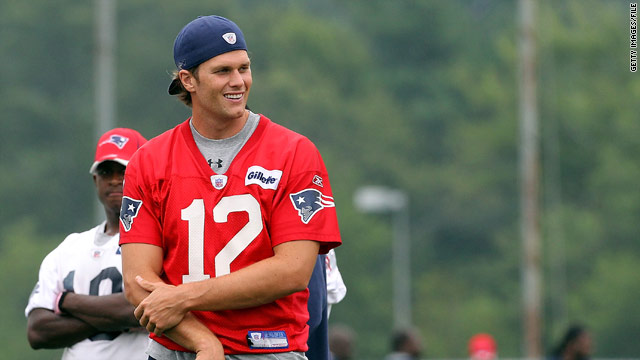 Tom Brady wants fans to drink up (water, of course)

New England Patriots quarterback Tom Brady wants his team’s fans to do some drinking so they can get sufficiently riled up for Sunday’s home opener.

And by drinking, he means the stuff you get from your kitchen faucet, his team helpfully adds.

Brady, addressing reporters Wednesday ahead of Sunday’s game against the San Diego Chargers, was asked whether he had a message for fans.

“Yeah, start drinking early,” he said, drawing chuckles from the reporters. “Get nice and rowdy. (It's a) 4:15 (p.m.) game, they have a lot of time to get lubed up, come out here and cheer for their home team.” (Video from CNN affiliate WCVB)

About an hour later, according to multiple media reports, a team spokesman stepped in to clarify what Brady really meant to say: He wants fans to “stay hydrated, drink a lot of water, be loud, drink responsibly."

Clearly, Brady was concerned about fans’ hydration, with game-day temperatures in Foxborough, Massachusetts, expected to be scorching in the upper 60s.

The Patriots’ audible does come amid fresh memories of fan rowdiness and violence. Last month, for instance, two shootings and a beating followed a preseason football game at San Francisco’s Candlestick Park.

Closer to home, drinking at Foxborough’s Gillette Stadium “during Patriots games and concerts has been a concern for neighboring towns,” the New York Post reported. This year, according to the Post, Foxborough instituted a $200 fine for drinking in public.

But the edit didn’t sit right with ESPN’s Scott Van Pelt, who addressed it on his radio show Thursday afternoon.

“The NFL has billions of dollars worth of ads – and so do we, during our broadcasts – of beer,” Van Pelt said. “There’s signage all over the stadium about beer. Only after Brady said that – less than an hour after, in fact – the PR of the Patriots puts out a statement which says, ‘He meant to say, (drink water).’

“No, he didn’t. That’s not what he meant. He meant what he said, which was, ‘Come out, have a few, get loud, and if you’re hammered, you’re hammered.’ I mean, I’m embellishing, but he didn’t say 'drink water and stay hydrated.'

“I pity anyone whose job it is to have a cleanup on aisle 3 when there’s no need for a cleanup,” Van Pelt added. “What Brady said was funny. Everyone knew what he meant. What he didn’t mean was drink water.”

NFL player Dominic Raiola wasn’t impressed with any controversy over Brady’s comments. The center for the Detroit Lions, who host the Kansas City Chiefs on Sunday at 1 p.m., told Michigan news outlet MLive.com that he was fine with Brady’s comments.