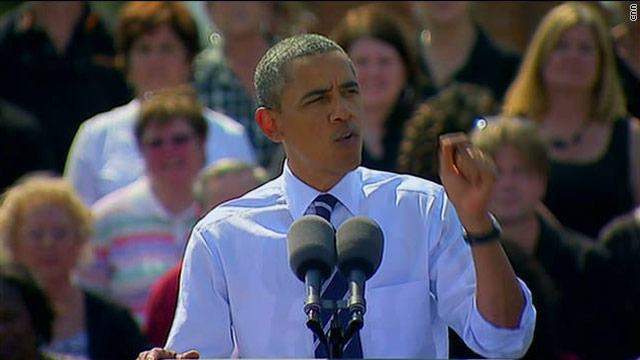 "A tax like this is overdue. The supposed 'job creators' have had lower taxes for a while now and done a poor job of creating jobs. Tax them unless they actually start creating jobs."–pplr

"Obama is just asking the rich to pay the same amount as the middle class. That is not class warfare."–Harrassed

Those earning more than $1 million a year would be taxed at rate matching that of middle-income earners, if President Obama's Buffet Rule is approved by Congress. The proposed tax hike is part of Obama's deficit reduction plan. Many CNN.com readers applauded the announcement.

poiuytrew said, "The rich do not create jobs! Their customers create jobs. Jobs are created when demand exceeds current capacity, and that happens when more people have money to spend. There is no such thing as a benevolent corporation. They will only hire when it's in their interest to hire, and it will only be in their interest when demand for their product skyrockets."

dphuff said, "I propose a shunning of any politician who uses the bogus term 'job creator' as a way to whitewash the word 'wealthy.' It's BS. Tax rates on the wealthy were higher during the Clinton years, and our economy was booming. It's time the rich paid their fair share, and that includes raising tax rates on unearned income as well. There's no reason that income from a pile of cash should be taxed any differently than income earned by honest labor."

EvelynWaugh said, "Obama is just raising taxes to previous levels .. and guess what, during Clinton they paid 31 percent and we had jobs. Now they pay 22 percent and we do not have jobs. Explain that?"

MtnDave said, "There need to be spending cuts but there also need to be tax increases on everyone. If Obama has a second term, this is exactly what he will do; and he certainly will not be liked for it (which is why it hasn't been done yet). For those who think this can be solved by spending cuts alone: they're part of the problem."

FoolKiller said, "So, the kids with the bubblegum have to bring enough for everyone, right Obama? Grow up! But since your target audience never did, this will probably keep working." pimpplaya999 replied, " 'The 'kids with the bubblegum' earned that bubblegum as a result of the lower rates they paid when the middle class saw their wages fall in the last decade. That bubblegum actually belongs to the middle class and they want it back."

Netflix announced that it was separating its movies-by-mail service and its movie-streaming service, and renaming the mail service "Quikster." Netflex said it will also be adding video games to its Quikster catalog. Most CNN.com readers said the changes were bound to fail.

xdougx asked, "Is Netflix committing suicide? Seems like they want to get rid of customers."

MFleurs said, "When you've already angered many of your clients, make your services harder to use. Brilliant! Not! They obviously are getting ready to sell the DVD division. This is not how you strengthen a business!"

dabble53 said, "Since the streaming side of things is newer, and theoretically quicker, I find it pretty stupid for them to apply the Qwikster name to the snail-mail business, and in the process, making the long-term customers get used to a new website. So long Netflix, or whatever your name is."

wtrtwnguy said, "Has Netflix gone insane? Everything with a '-ster' name online has been a bust and this will be no different."

amused2000 said, "It seems like Netflix is desperately trying to make its streaming service relevant. You know what would have been more effective? Boosting their streaming library."

But LightSpeed1 said, "Everybody here keeps blaming Netflix. They had to raise their prices. The studios keep asking for more and more money. Blame them. For example, just recently, Starz/Disney announced they would be pulling their movies as of February, when their current contract is up. Netflix offered them a 300 percent increase on their current deal and they refused it."

suprdude said, "Movie distributors were given a fair price, but they realized they could get more and everyone jumped on the bandwagon. Now they're getting so greedy, they're killing the golden goose (Nefflix), and indirectly the consumer."

Greebo512 asked, "Do any other streaming services spare us commercials?"

A little girl's memories stir questions about good and evil

In a four-part series, (with the fourth to be published Tuesday), writer Wayne Drash travels back to a small town, where in the late 1970s, the Rev. Robert Nichols and his family were terrorized by local power player, Horry Watts. The story had some CNN.com readers talking about bullies. <a

QLorraine said, "This is an example of what happens when the 'masses' don't stand up to one tyrant. Watts was a grown-up bully. If everyone had gotten together and showed a united front against this guy, it might have turned out differently. But everyone was too afraid. That's the only way a tyrant gets power. It's given to him because he isn't afraid to use it. But, get the majority together, and things change. Sad that this couldn't happen."

thewiz71 said, "While this is an extreme case, many are unaware of the extent to which many clergy face bullying and harassing behavior, often stemming from people who feel proprietary over the congregations the clergy lead. I have had friends run out of churches, not because they weren't dutiful, competent, and faithful, but because they wouldn't let a particular person in the congregation have their unilateral way with things. Such bullies even have a title: 'Clergy killers'."

glimmertwin said, "I live in the north – and though this case is an extreme one (north or south)–I can assure you , bullies who want to protect their turf or income are everywhere."

aimeekathryn said, "Thank you, Mr. Drash, for your interesting story! I grew up in that time when small town people with money often thought they were above the law, or bought off politicians. Excellent story of forgiveness."

funtasticguy said, "This story is riveting and heart-wrenching. I can't wait until tomorrow to read how it all ends! Thanks CNN for sharing such a powerful story."

Lastholdout said, "Fifty bucks says that there's absolutely no connection between Williams and Watts, and that it was just really bad timing. I like how they say 'Mercer didn't get the evidence quickly enough.' This would hold true if it was Watts or a killer hired by Watts who conducted the final attack; however, this is obviously not the case."

10:46 pm ET May 17, 2022 RETWEET
The US Food and Drug Administration has granted emergency use authorization for a booster dose of Pfizer/BioNTech'sâ€twitter.com/i/web/status/1â€¦Uj
cnnbrk

11:00 am ET May 17, 2022 RETWEET
Iran-backed Hezbollah has lost its parliamentary coalition majority in Lebanon's first election since the country'sâ€twitter.com/i/web/status/1â€¦fG
cnnbrk

5:45 am ET May 17, 2022 RETWEET
The baby formula manufacturer at the heart of a nationwide recall says it has reached an agreement with the FDA onâ€twitter.com/i/web/status/1â€¦zo
cnnbrk

5:22 pm ET May 16, 2022 RETWEET
68-year-old David Chou, of Las Vegas, Nevada, has been named as a suspect in the deadly shooting at a church in Lagâ€twitter.com/i/web/status/1â€¦Om
cnnbrk