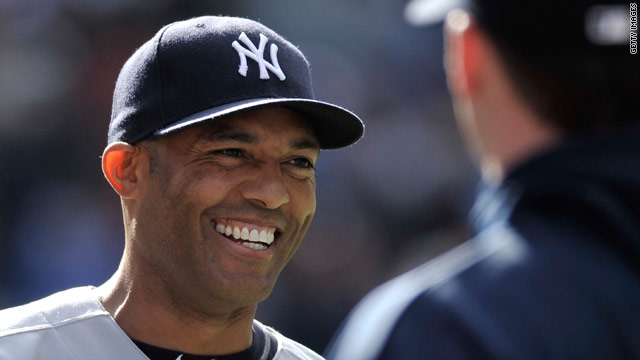 Enter Sandman - into the record books.

New York Yankees’ closer Mariano Rivera grabbed his 602nd save of his career Monday, making him Major League Baseball's all-time "saves" leader. With the save on Monday, he passed previous record-holder Trevor Hoffman. Rivera etched his name into the record books after he closed the door on the Minnesota Twins, earning a 6-4 victory for the team at Yankee Stadium.

Sports Illustrated: The meaning of Mariano

The 41-year-old came in to his entrance song of  "Enter Sandman," which normally signals the end for the opposing team. The crowd went wild.

And Rivera responded in typical fashion: He pitched a 1-2-3 ninth inning to earn him the 43rd save of the season, which is the second most total saves he's had during a single year.

Rivera has been a hero in the minds of many Yankees fans for years, known as the go-to guy in tough situations. And for good reason - his clutch post-season play has earned him 42 saves - also the most of all time.

As they have so many times before, the Bronx Bombers' faithful gave Rivera the kudos he deserved. They cheered "Let's go Mo!" as he approached the feat and cheered loudly as the final hitter did nothing but look on as Rivera's strike crossed the plate to end the game.

"I love you," Rivera said to the Yankee Fans. "These fans are the best fans there are in baseball."

Rivera becomes the second player from the "Joe Torre" era to find their way into the record books this year. In July, shortstop Derek Jeter notched his 3,000th hit with a solo homer.