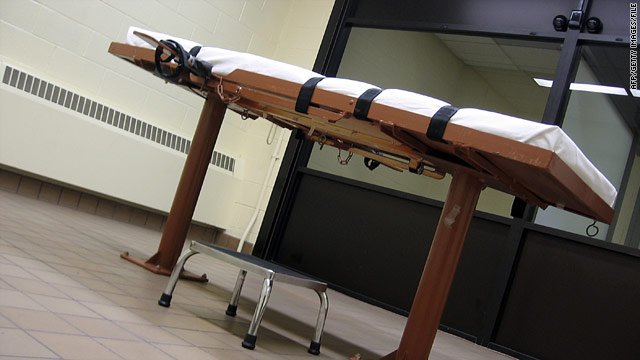 Fast Facts: Breaking down the current state of the death penalty

Davis was convicted of the 1989 killing of Savannah, Georgia, police officer Mark MacPhail. He is scheduled to be executed by lethal injection at 7 p.m. Wednesday at a state prison in Jackson, Georgia.

Davis' case gained momentum with the support of Amnesty International, ex-President Jimmy Carter and Archbishop Desmond Tutu, among others, calling for clemency to be granted.

However, the Georgia Parole board denied Davis clemency once before. And the board has never changed its mind on any case in the past 33 years.

The high-profile case has again brought the death penalty back into the spotlight. So we're taking a look at the current state of the death penalty, the clemency process and specifically the statistics in Georgia.

- Capital punishment is legal in 34 states.

- The legal methods of capital punishment are lethal injection and the electric chair.

-  The state of Nebraska used the electric chair as its sole method until February 2008, when the Nebraska Supreme Court ruled that it was unconstitutional.

- Japan is the only industrial democracy besides the United States that has the death penalty.

- Over 75% of the murder victims in cases resulting in an execution were white, even though nationally only 50% of murder victims generally are
white.

- Since 1973, over 130 people have been released from death row with evidence of their innocence.

In California the governor may not grant a pardon or commutation to a person twice convicted of a felony except on recommendation of the state Supreme Court, with at least four judges concurring. New York and New Jersey no longer have the death penalty. New Mexico no longer has the death penalty for cases after 2009, though two inmates still remain on death row.

- In seven states the governor must have a recommendation of clemency from an advisory group or board: Florida, Louisiana, Oklahoma, Pennsylvania and Texas.

In Florida the governor must have recommendation of Board, on which he or she sits.

- In ten states the governor can get a non-binding recommendation for clemency from an advisory group or board: Idaho, Illinois, Indiana, Kansas, Maryland, Missouri, Montana, New Hampshire, Ohio and Tennessee.

Illinois no longer has the death penalty.

- In five states an advisory group or a board determines clemency: Connecticut, Georgia, Nebraska, Nevada and Utah.

- In the 1972 case Furman v. Georgia, the Supreme Court struck down three death sentences, deeming them "cruel and unusual." The ruling effectively suspended capital punishment across the country. States then began rewriting their statutes to comply with the court's ruling.

The death penalty was re-enacted in Georgia in 1973. In 1976, the new law was taken to the Supreme Court, which ruled that Georgia's new capital punishment procedure were sufficient in reducing arbitrary imposition of the death penalty.

- Currently there are 103 people on death row in Georgia. One of them is a woman.

- Georgia's most recent execution was of Andrew Grant DeYoung. He was the third person executed in 2011 by Georgia. His case gained national attention because the execution was videotaped.

- In Georgia, a defendant can get death for a felony where they are not responsible for the murder.

- Five innocent people have been freed from death row in Georgia.

- Seven clemencies have been granted. In Georgia, the State Board of Pardons has exclusive authority to grant clemency. Georgia is one of five states that operates this way.