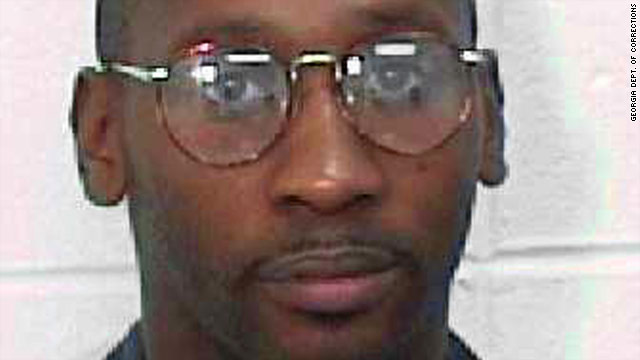 Davis was convicted of the 1989 killing of Savannah, Georgia, police officer Mark MacPhail.

Davis is scheduled to be executed by lethal injection at 7 p.m. Wednesday at a state prison in Jackson, Georgia.

"Monday September 19, 2011, the State Board of Pardons and Paroles met to consider a clemency request from attorneys representing condemned inmate Troy Anthony Davis. After considering the request, the Board has voted to deny clemency," the board said in a statement Tuesday morning.

The five-member parole board votes in a secret ballot.

Davis has gained international support for his long-standing claim that he did not kill MacPhail. International figures including Pope Benedict XVI, Desmond Tutu, and former President Jimmy Carter, entertainers such as Susan Sarandon, Harry Belafonte, and the Indigo Girls, and others have joined with Amnesty International, the NAACP and other groups in supporting Davis' efforts to be exonerated.

He has been scheduled to die three times before, most recently in October 2008, when the U.S. Supreme Court granted a stay two hours before he was to be executed.

Since Davis' conviction in 1991, seven of the nine witnesses against him have recanted or contradicted their testimony. There also have been questions about the physical evidence - and, according to some, the lack thereof - linking Davis to the killing.

Amnesty International reacted angrily to the clemency denial on Tuesday.

"It is unconscionable that the Georgia Board of Pardons and Paroles has denied relief to Troy Davis. Allowing a man to be sent to death under an enormous cloud of doubt about his guilt is an outrageous affront to justice," Amnesty International said in a statement Tuesday.

"Should Troy Davis be executed, Georgia may well have executed an innocent man and in so doing discredited the justice system," the statement said.

But the victim's mother, Anne MacPhail, said she's satisfied that Davis will be executed.

"Well, justice is done, that's the way we look at it. That's what we wanted," the mother told CNN. "I am very convinced that he is guilty."

She said she would not attend Davis' execution but family members would be there.

Anne MacPhail said she has not forgiven the convicted of killing her son.

"Not yet, maybe sometime," she said.

The NAACP and Georgians for Alternatives to the Death Penalty had joined Amnesty International in organizing support for Davis, setting up about 300 rallies, vigils and events worldwide in the past week or so. In addition, they said that more than 1 million people have signed a petition in support of Davis' bid to be exonerated.

In a 2008 statement, then-Chatham County District Attorney Spencer Lawton described how Davis was at a pool party in Savannah when he shot another man, Michael Cooper, wounding him in the face. Davis was then driven to a nearby convenience store, where he pistol-whipped a homeless man, Larry Young, who'd just bought a beer.

Soon thereafter, prosecutors said, MacPhail - who was working in uniform, off-duty, at a nearby bus station and restaurant - arrived. It was then, the jury determined, that Davis shot the officer three times, including once in the face as he stood over him.

Davis' lawyers, in a federal court filing, insisted that there is "no physical evidence linking" Davis to MacPhail's murder. They point, too, to "the unremarkable conclusion" of a ballistics expert who testified that he could not find definitively that the bullets that wounded Cooper and killed MacPhail were the same.

Georgia's attorney general, in an online statement, claimed that the expert said the bullets came from the same gun type and noted that casings at the pool party shooting matched - thus came from the same firearm as - those found at MacPhail's murder scene.

Two decades ago, a jury convicted Davis on two counts of aggravated assault and one each of possessing a firearm during a crime, obstructing a law enforcement officer and murder. The latter charge led, soon thereafter, to his death sentence.

While reviewing Davis' claims of innocence last year, the U.S. District Court for the Southern District of Georgia found that Davis "vastly overstates the value of his evidence of innocence."

"Some of the evidence is not credible and would be disregarded by a reasonable juror," Judge William T. Moore wrote in a 172-page opinion. "Other evidence that Mr. Davis brought forward is too general to provide anything more than smoke and mirrors."

The parole board denied had denied Davis clemency once before. The board has never changed its mind on any case in the past 33 years.