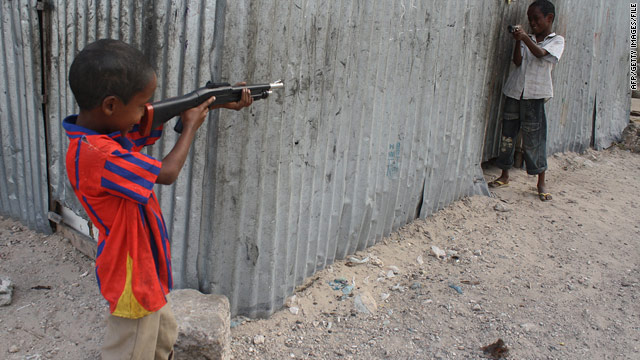 Three Somali teenagers who won a Quran recitation contest have been rewarded with weapons and cash by the Islamist group Al-Shabaab, according to reports from Somalia.

The first-place winner was awarded an AK-47 rifle and $700, a report from RBC Radio said. Second place was worth an AK-47 and $500, and third place got two grenades and $400, RBC reported. Winners also received religious books.

The contest was organized by Al-Shabaab-controlled Radio Andalus, the report said.

At an awards ceremony in the Mogadishu neighborhood of Elasha, Al-Shabaab leaders urged the teenage winners to use their weapons.

ŌĆ£We want the children to fight for defending of their country and their religion┬Ā... ┬Ājust take these guns,ŌĆØ Sheikh Moktar Robow abu Mansur, a senior Al-Shabaab leader, is quoted as saying. That means battling the Somali government and African Union peacekeeping troops in the country, according to the RBC report.

NBC's cancellation of next year's Golden Globes ŌĆö historically one of the major events on Hollywood's months-long atwitter.com/i/web/status/1ŌĆ”8yhE
cnni

3:16 pm ET May 11, 2021 RETWEET
"From a business perspective, this was the right move by the networkŌĆ”But from a public relations and moral point oftwitter.com/i/web/status/1ŌĆ”fiPD
cnni