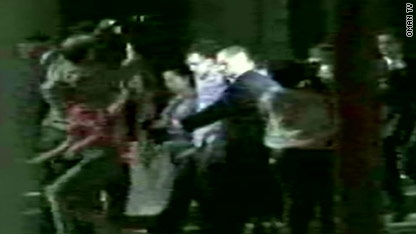 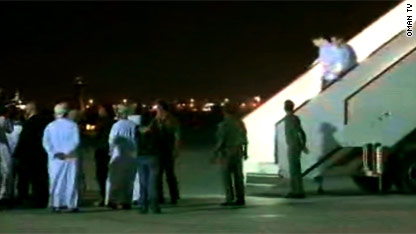 [Updated at 3:33 p.m. ET] Josh Fattal’s uncle Fred Felleman, shortly before the plane landed in Oman, told CNN that he’s excited that the hikers are free. Asked whether he knew anything about Fattal’s plans, Felleman said he knew his nephew was studying for the GRE.

Shane Bauer’s brother-in-law, speaking to CNN from Duluth, Minnesota, said he is “so happy that it’s just finally going to be over.”

“I actually found out at about 4 a.m. this morning. My wife called me and said, ‘I think something’s going to happen today, so be prepared,’” Lindstrom said.

“It’s been really long and really frustrating, but we never gave up hope that it was going to end,” he added.

[Updated at 2:59 p.m. ET] Freed hiker Josh Fattal spoke with his brother, Alex, by phone after the release, according to a source familiar with the hikers’ release.

Family members of both Josh Fattal and Shane Bauer are on their way to the airport in Muscat, Oman. It’s not clear whether Bauer was able to speak with his parents or his fiancée, Sarah Shourd, according to the source.

The families’ spokeswoman Samantha Topping declined to confirm the report. She did say Josh Fattal's brother "sounded great and so did Cindy (Shane’s mother)."

"Today can only be described as the best day of our lives.  We have waited for nearly 26 months for this moment and the joy and relief we feel at Shane and Josh's long-awaited freedom knows no bounds.  We now all want nothing more than to wrap Shane and Josh in our arms, catch up on two lost years and make a new beginning, for them and for all of us.  For now, we especially would like to thank His Majesty Sultan Qaboos bin Said Al Said of Oman and his envoy Dr. Salem Al Ismaily; our lawyer, Mr. Masoud Shafii; and the Swiss Ambassador to Iran, Livia Leu Agosti, and her colleagues, for working to make today a reality.  At the same time, our deep gratitude extends to many, many others, from governments, institutions and noted campaigners to tens of thousands of people around the world.  Their support for Shane, Josh, Sarah and our families has sustained us and comforted us throughout this time.  Our appreciation for the warmth and love of our fellow human beings is unending and we know that Shane and Josh will always be grateful."

"You can state officially now that the government of the Islamic Republic of Iran has handled Shane and Josh to the custody of Dr. Salem Al Ismaily, the envoy of  His Majesty Sultan Qaboos bin Said, the Sultan of Oman, a country that enjoys excellent relationships with both the IRI and the USA. Dr. Al Ismaily with the hikers are now on their way to Muscat where they will spend a couple of days before heading home,” a statement from Oman's envoy in Iran said.

[Updated at 9:09 a.m. ET] Masoud Shafiee, lawyer for American hikers Josh Fattal and Shane Bauer, says outside Tehran's Evin Prison, "In four or five minutes they will be released."

[Updated at 7:21 a.m. ET] The attorney for the U.S. hikers has entered Tehran’s Evin prison, from which the hikers are expected to be released today. The lawyer entered the main building accompanied by officials from the Swiss and Omani embassies. Oman has helped in negotiations to free the hikers.