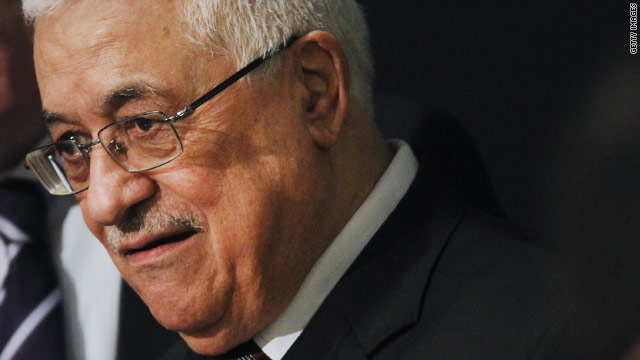 The president of the Palestinian Authority Mahmoud Abbas shown this week at the United Nations.
September 21st, 2011
03:07 PM ET

Abbas in the spotlight: Who is the Palestinian president?

Palestinian Authority President Mahmoud Abbas is in the spotlight this week at the United Nations General Assembly where he plans to urge the U.N. to recognize an independent Palestinian state.

Generally considered by the West to be a moderate, Abbas has been president of the Palestinian Authority since 2009. Time magazine describes him as a snowy-haired chain smoker who loves to negotiate.

Abbas is in his late 70s and has three children. His own childhood was shaken in 1948 when under British mandate, his family left their town of Safed, in what is now northern Israel. Safed is today considered one of Judaism's four Holy Cities. The young Abbas' family relocated to Syria. He took a job laying floor tiles and also taught elementary school. He went on to earn a law degree and at a college in Moscow obtained a PhD in history.

One of Abbas' first forays into politics came in 1959 when he helped found the Palestinian National Liberation Movement, more commonly known as Fatah. In the late 1990s, Abbas began serving as Yasser Arafat's spokesperson in missions to Eastern Europe and the Gulf states. He also cultivated ties to Europeans sympathetic to the cause of greater autonomy for Palestinians.

Abbas played a role in the 1993 historic peace accord between PLO Chairman Arafat and Israel Prime Minister Yitzhak Rabin, and as part of that accompanied Arafat to the White House to sign the agreement.

In March 2003, Abbas became prime minister of the Palestinian Authority. In that role, he met with former President George W. Bush and the leaders of Egypt, Saudi Arabia, Jordan and Bahrain, in Sharm el-Sheikh, Egypt, to discuss peace negotiations. But only six months into his leadership, Abbas resigned, saying that he didn't get enough support for his efforts at peace from his own party.

Terrorists were continuing to attack Israeli civilians, and his attempts to control the violence was failing. Abbas also blamed Israel and the Bush administration for undermining his administration.

Throughout the early and middle 2000s, Abbas worked to negotiate peace and in late 2007 he attended Annapolis Middle East Peace Conference, the first formal peace conference sponsored by the U.S. since 2000. Top diplomats and representatives from dozens of countries and organizations also attended, hoping to restart stalled Middle East peace negotiations.

In 2008, Abbas met with President Bush at the White House and the next year his term ended. In a controversial move, his term was later extended by the PLO central committee.

In a speech last Friday, Abbas announcedÂ  plans to make a major request on behalf of Palestinians at his annual trip to the United Nations.

"We are going to the United Nations to attain full membership," he said.
Abbas is careful to note that the request not be taken to mean anything more than a request. "We are not going to bring independence. Let's not exaggerate," he said. "We will continue to negotiate."