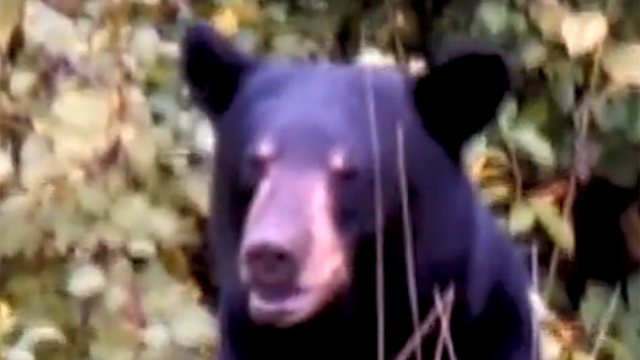 There may not be any lions and tigers, but today's bear videos will make you say, "oh my!" From a father and son who venture too close to a wild bear to a real-life version of "Kung Fu Panda," Gotta Watch features some of our most intriguing videos about bears.

Close encounters – A father and son get within an arm's length of a bear in Virginia. Check out the up-close-and-personal video they captured. Would you go this far?

Talent show – Two baby bears in north China's Shandong Province roller skate, jump rope, and ride bikes for an audience. The two baby bears are just over one year old. Surely this couldn't have been the bears' idea - does it rise to the level of animal abuse?
[cnn-video¬Ýurl="http://www.cnn.com/video/#/video/world/2011/09/21/vo-cctv-skating-bears.cctv"%5D

Forget 'Kung Fu Panda' – This viral video of a bear doing "kung fu" sparked a debate over whether the video was doctored. We decided that it's the real thing, but watch the video to make up your own mind.

Noodle, A 13-year-old adopted pug, has a massive following on TikTok for his hilarious forecasts of the future.‚Ätwitter.com/i/web/status/1‚Ä¶ca
cnni

4:31 pm ET October 23, 2021 RETWEET
Russian and Chinese warships have conducted the first ever joint patrol in the western part of the Pacific Ocean, t‚Ätwitter.com/i/web/status/1‚Ä¶b4
cnni

3:43 pm ET October 23, 2021 RETWEET
The Vikings used their longships to cross the Atlantic Ocean and settled in Canada as early as 1021, according to a‚Ätwitter.com/i/web/status/1‚Ä¶5z
cnni