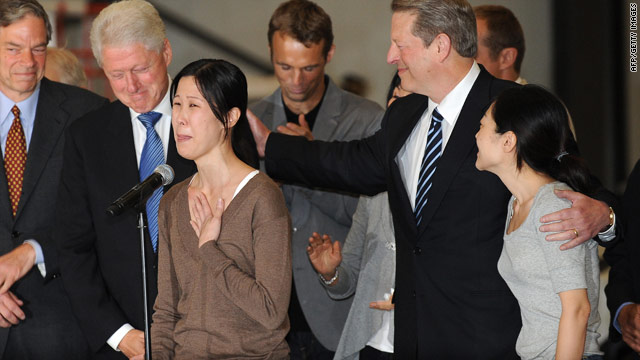 A look at other Americans who were jailed abroad

As word came Wednesday that two American hikers were released from their two-year imprisonment in Iran, CNN looked at some other cases of U.S. citizens jailed in other countries.

* December 2009 - Alan Gross was jailed while working in Cuba as a subcontractor on a U.S. Agency for International Development project aimed at spreading democracy. Cuban authorities deemed his actions illegal. He was accused of trying set up illegal Internet connections, but Gross says he was trying to help connect the Jewish community to the Internet and was not a threat to the government. In August 2010, New Mexico Gov. Bill Richardson, on a trade mission to Cuba, pressed the island nation to free Gross. In March, Gross was found guilty and sentenced to 15 years in prison for crimes against the Cuban state. President Jimmy Carter failed to get Gross freed after visiting Cuba and arguing he should be released because his mother and daughter were battling cancer. This month, Richardson will go back to Cuba on a private mission. Gross is still in prison.

* July 2009 - Shane Bauer, Josh Fattal and Sarah Shourd were accused of illegally crossing into Iran while hiking in Iraqi Kurdistan near its border with Iran. Shourd was released for medical reasons; Bauer and Fattal were convicted last month of entering Iran illegally and spying for the United States. Both were sentenced to eight years in prison but were released on bail on Wednesday.

* June 2009 â€“ Iranian-Canadian journalist Mazier Bahari, then a reporter for Newsweek, was incarcerated during protests sparked by the Iranian election. He was released in October 2009 and has written a memoir about the experience called "Then They Came for Me."

* January 2009 - American journalist Roxana Saberi was arrested in Iran. That April, the Iranian government charged her with espionage, a charge she denies. She was sentenced to eight years in prison and sent to Evin Prison, the same lockup where the American hikers were jailed. The facility is notorious for reported torture and extreme psychological mistreatment of inmates. An appeals court reduced the charge from espionage to possessing classified information, which she also denied. The sentence was reduced to two years, and she was released in May 2009.

* May 2008 - Reza Taghavi, an Iranian-American and retired businessman from Orange County, California, was detained in Iran on suspicion of supporting an anti-regime group. Taghavi's lawyer, Pierre-Richard Prosper, negotiated Taghavi's release, which occurred in October 2010.

* May 2007 - Iranian-American scholar Haleh Esfandiari, of the WoodrowÂ Wilson Center in Washington, was imprisoned for several months in Evin Prison on suspicion that the Wilson Center was part of an effort to topple the Iranian government. She was released in August 2007 and later wrote the book â€śMy Prison, My Home.â€ť

* April 12, 2011 - American Eddie Yong Su Jun Â was detained in North Korea. On April 14, Korean state news reported that Yong Su Jun was arrested in November 2010 and had been under investigation for committing a crime against North Korea. No details on the alleged crime were provided. In May, following a visit from an American delegation including Robert King, the special envoy for North Korean human rights, and Jon Brause, the deputy assistant administrator of the U.S. Agency for International Development, Yong Su Jun was released.

* January 25, 2010 – Aijalon Mahli Gomes of Boston was detained in North Korea after crossing into the country illegally from China. He had formerly taught English in South Korea. In April 2010, Gomes was sentenced to eight years of hard labor and ordered to pay a fine of 70 million won, or approximately $600,000. Later that summer he was hospitalized after attempting suicide, and in August President Carter went to Pyongyang and successfully argued for Gomesâ€™ release. The two left North Korea after leader Kim Jong-Il agreed based on humanitarian purposes.

* March 2009 - Journalists Euna Lee and Laura Ling crossed into North Korea and were apprehended by North Korean soldiers. They were charged with illegal entry to conduct a smear campaign. In June 2009, the women were sentenced to 12 years hard labor in a North Korean prison with no forgiveness and no appeal allowed. But later that summer President Clinton went to Pyongyang on a private humanitarian mission and met with Kim Jong-Il. The reporters were released in August after 140 days in captivity. L Laura Ling wrote this op-ed for CNN.com about the American hikers.

A one-year-old child died Thursday after being left in a hot vehicle in Danielsville, Georgia, authorities said, brâ€twitter.com/i/web/status/1â€¦76
cnni

5:00 pm ET July 1, 2022 RETWEET
A teenage girl is in serious but stable condition after being bitten by a large shark while scalloping near Keatonâ€twitter.com/i/web/status/1â€¦5Y
cnni

A one-year-old child died Thursday after being left in a hot vehicle in Danielsville, Georgia, authorities said, brâ€twitter.com/i/web/status/1â€¦76
cnni

5:00 pm ET July 1, 2022 RETWEET
A teenage girl is in serious but stable condition after being bitten by a large shark while scalloping near Keatonâ€twitter.com/i/web/status/1â€¦5Y
cnni