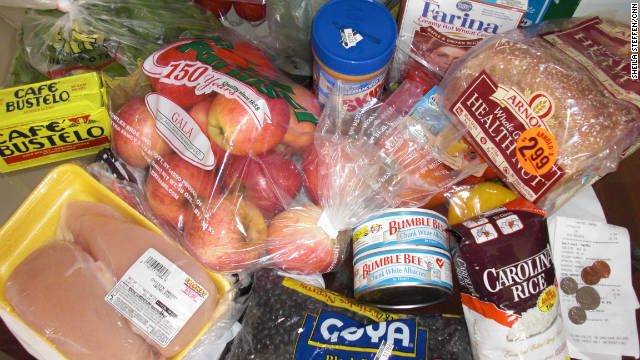 Overheard on CNN.com: $30 a week for food is plenty

As part of a special report on hunger in America, CNN producer Sheila Steffen challenged herself to a grocery budget of 30 dollars a week—the average food stamp allotment for more than 40 million Americans. She wrote a blog about her shopping experience and asked readers: could you eat on $30 a week?

The answer from commenters was a resounding yes—and plenty of suggestions on how to do it, too.

Hungry Jack said, “I am in grad school and can eat pretty well on $30 week, and I don't mean Ramen Noodles. It is just a matter of planning, using coupons, and buying things on sale. Anyone who has even rudimentary cooking and math skills can get by just fine.”

BrendaS said, “In my household, there are three adults and two teenagers. We spend, on average about $250 a month and we don't get food stamps. All the adults work, but cost of living for utilities, gas to and from work and basic living needs, leaves us very little to buy quality, nutritious foods that are healthy for my family. We do it all the time, but it's not what everyone likes or would want if we had a little more to buy with.”

KindaSorta said, “Depending on where you live. The cost of food varies (from) state to state.”

Desy said, “The answer is obviously yes, but would I get the healthy variety I get now? Absolutely not.”

victim of democrat hypocrisy responded, “Here's a more interesting epilogue–we're ALL going to be trying to live on $30 a week to pay for Obamacare, Medicare, and Social Security!”

Aaron said, “If you are not concerned with the origins of the food, $30 is possible, but if you wish to eat healthy, avoid processed foods and keep things natural/organic (as in no pesticides, preservatives, antibiotics, hormones, etc), then $30 is a joke.”

T3chsupport said, “Here are some meals I was raised on. "Ronies": My dad's invention: tomato sauce + macaroni (Tabasco optional). Chilli Noodles: just like it sounds, chilli + macaroni (Tabasco optional). Hamburger gravy over white rice, or leftover mashed potatoes... mix all of that up with some frozen corn and nom nom. A snack was often times a flour tortilla laid directly on a stove burner, left to grill up a tiny bit, with some melted butter spread around inside. Roll up and nosh.”

Mary said, “The egg is really the world's most perfect food. And if you had to (and didn't mind the cholesterol) you could stretch a $3.00 carton to feed yourself breakfast lunch and dinner for a week. I'd rather eat scrambled eggs with salsa and toast than ramen."

Jen said, “Trader Joe's is a great place to shop. They've got lots of healthy food and low prices.”

Yougottabekiddingme said, “OMG. $30 for a WEEK!? That's a luxury I can't afford. Try this: peanut butter sandwiches (on wheat bread) every morning for breakfast. A homemade spread (like bologna salad) on wheat for lunch. Hamburger Helper for dinner (or hot dogs.) Where are the fresh fruits and veggies? THERE AIN'T NONE – can't afford it. Consider yourself VERY lucky if you can afford more than $30.00 a week for food.”

KWDragon said, “Okay, I get what many of you are saying. I could do $30 per week when I was in college, too. So could my husband. However, we now have two teenage daughters. They have certain nutritional needs that Ramen seven days a week will not cover. Nor am I interested in mac & cheese all the time. It is not healthy. Milk is a requisite, as are fresh vegetables. We have a good supply of meat in the freezer, as we buy a whole animal or two every fall (whole pig, quarter cow). We don't eat fancy, but we do eat well. And there is no way we could feed the four of us EXCLUSIVELY on $120 per week, without hitting our freezer and the extra veggies we can each fall.”

A newly released decade-long survey of American congregations shows religious health and vitality are weaker than they were 10 years ago. Fewer people are attending weekly services (a drop from 130 to 108 during the decade) and churches are facing harder times financially due to the recession.

Many CNN.com readers shared their own worship experience and thoughts about what caused the decline.

Chris said, “I know my religious attendance went down over the last ten years. I started the decade in a foreign country serving a mission for my church and I was 100 percent sure what I was doing was correct. Ten years later I still am glad I served, but my church attendance is down and I don't feel the same I used to. I think it is because I am 30 now and I see things differently.”

Ralph in Orange Park, FL said, “Maybe it is the result of people who used to think they were "obligated" to go to church finally figuring out that they are not."

DJ said, “Don't know where you are getting your info, but the Pentecostals are growing by leaps and bounds. This year, they are growing by the thousands.”

Grant said, “I'm kind of glad. Never seemed to me that God needed all that earthly wealth anyway. Maybe folks will get back to praying without paying."

Believer said, “This decline must be taken in context. Certain denominations have been declining while others have been growing tremendously. And perhaps, could there be any co-relationship between our declining faith and worship, and our worsening economy – humm."

free2do said, “I think some people are turned off by some of the hypocrisy and political activism.”

Eli responded, “You are right...at least for me. The biggest issue with the church is the fallacy inside and outside of the whole organization.”

Jman said, “The fall away from the church is foretold in Revelations. 90% of what is written in Revelations has already come to pass. Maybe it is time for TakeaHike to wake up and ask for forgiveness and mercy from God.”

TheTruth72 said, “Christians are the ‘church.’ We don't need buildings to have a relationship with Jesus. I got out of Catholicism about a year ago due to tradition that didn't make sense to me and many things not even in the Bible. It’s hard telling people who are caught up in it, because they just continue to believe the man made doctrine.”

Facebook has rolled out an overhaul to users’ home pages and they all thrilled. Among the changes, ‘Top Stories’ hover over recent posts in News Feeds and there is a new quick-scrolling ‘Ticker.’ Facebook says changes help people find the top news, not just the latest updates.

Anolderguy said, “’Top Stories?’ It is a top story if I think it is a top story. I don't like an algorithm deciding what is important to me. Some things just don't need to be automatic unless I ask it to be.”

ladycyanide said, “I don't care for most of the new changes, but they're tolerable. What's outright hexing me is the fact that my status updates, which are set to friends only, along with most of my profile, have become visible to anyone.”

Austinstar said, “Personally I have enjoyed using Facebook. I'm talking to people from my past that I probably wouldn't be communicating with otherwise. It also has helped me promote myself as a musician. However, I do not like the new changes. The ticker thing is way distracting. What annoys me most is that there is no way to opt out from these ‘improvements.’"

lbrunett said, “I haven't logged on to see the changes yet but I have heard plenty of complaints from my friends. I certainly do not want non-friends to see any of my posts and I hope they fix that right away.”

Vsaxena said, “I'm getting very sick of this. I had organized my feed by hiding stuff I didn't care for, and Facebook has managed to undo all that with one stroke.”

WebsterLong said, “Does Facebook think its time for me to have lunch? I'll await their answer.”

Compiled by the CNN.com moderation staff. Some comments edited for length or clarity