A North Carolina county has established checkpoints to stop visitors and non-resident property owners from enteringâ€twitter.com/i/web/status/1â€¦jn

Six people were injured in the tornado that swept through Jonesboro, Arkansas, the mayor told CNN affiliate KARKâ€twitter.com/i/web/status/1â€¦P5

North Korea fired an unidentified projectile into the sea off the coast of Japan, the sixth launch by the Kim Jongâ€twitter.com/i/web/status/1â€¦Ld

President Trump asks the CDC to issue a strong travel advisory for New York, New Jersey and Connecticut, but not aâ€twitter.com/i/web/status/1â€¦zd

At least 2,000 people have died in the US from coronavirus. That number reached 1,000 just over two days ago.â€twitter.com/i/web/status/1â€¦V9 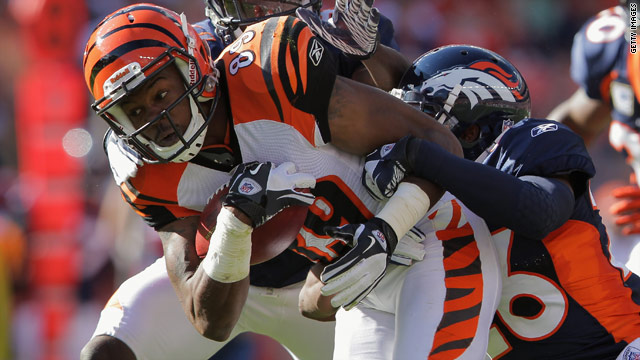 The Bengals wide receiver is tackled after making a catch against the Denver Broncos last weekend.
September 22nd, 2011
01:29 PM ET

Authorities: 2.5 pounds of pot sent to home of Bengals player

Authorities tracked the package from a mail distribution center in Sacramento to Simpson's home in the Cincinnati suburb of Crestview Hills, Kentucky, said Michelle Gregory of the California Bureau of Narcotics Enforcement. The package originated in Eureka in northern California, she said, and was one of 40 packages authorities were tracking.

The California authorities notified those in Kentucky, who monitored the delivery. Aleen Smith, identified as Simpson's girlfriend, signed for the package, Gregory said.

A search of the home, to which Simpson consented, revealed six more pounds of marijuana along with scales, boxes and packaging materials consistent with a distribution operation, Gregory said.

Simpson and a teammate who was at his house, offensive tackle Anthony Collins, were questioned and released, Gregory said.

Charges in the case are expected to be filed this week, she said, but it was unclear Thursday where those charges would be filed. Whether the charges are state or federal, they will likely be felony charges, Gregory said.

The Kenton County, Kentucky, prosecutor's office said Thursday it had no comment on the case.

Calls to Simpson's home on Thursday were hung up on.

Simpson is a fourth-year wide receiver from North Carolina. He has started both the Bengals' games this season, grabbing eight passes for 180 yards.

Collins is a fourth-year linebacker from Texas who has played mostly special teams this year, according to the Bengals' website.

Apple has released a website and an iOS app that allows users to screen themselves for coronavirus symptoms cnn.it/3dx4QQp
cnni

8:31 am ET March 29, 2020 RETWEET
During the coronavirus pandemic, it's best to revert from contact lens to glasses, experts suggest, to keep from spâ€twitter.com/i/web/status/1â€¦cX
cnni

8:01 am ET March 29, 2020 RETWEET
Volunteers across the US have formed sewing groups to make as many masks as they can for hospitals in need of moreâ€twitter.com/i/web/status/1â€¦7P
cnni

7:31 am ET March 29, 2020 RETWEET
RT @VanDamCNN: WATCH: Itâ€™s top of mind across the brightest in the medical field. Wil#COVID1919 slow its deadly rampage across the world asâ€¦
CNNweather