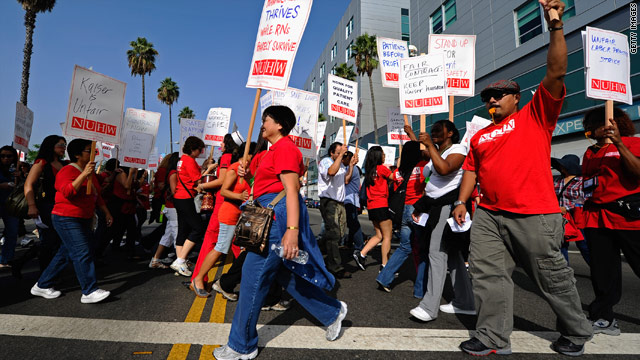 Nurses strike: Almost 23,000 nurses at hospitals in northern and central California won't report to work on Thursday as they stage a one-day strike to protest concessions demanded by hospitals that the nurses say will hurt their role as patient advocates and cut their health and pension benefits.

The strike by members of the California Nurses Association/National Nurses United targets hospitals operated by Sutter Health and Kaiser Permanente as well as Children's Hospital in Oakland.

Among their grievances, the  nurses say job concessions sought by Sutter Health would require them to report to work when ill, endangering patient health, according to a statement on the union's website.

At Kaiser, nurses are striking in sympathy with co-workers who face cuts in their health coverage and retirement plans, the nurses' union says.

Complaints at Children's Hospital include cuts to health care plans that would make it too expensive for nurses to bring their own kids to Children's for treatment, according to the union statement.

He'll speak with the Brent Spence Bridge as a backdrop. The span across the Ohio River carries one of the country's major trucking routes, but it is in need of $2.4 billion in repairs, according to the Cincinnati Enquirer.

The bridge links the constituencies of the top two Republicans in Congress - House Speaker John Boehner's district is on the Ohio side while Kentucky is home of Senate Minority Leader Mitch McConnell, and winning Ohio's 18 electoral votes in 2012 could be pivotal to Obama's re-election.

"The wrongdoing by the U.S. side will inevitably undermine bilateral relations as well as exchanges and cooperation in military and security areas," Chinese Vice Foreign Minister Zhang Zhijun said, according to Xinhua. Zhang summoned U.S. Ambassador Gary Locke to lodge a protest.

The $5.3 billion arms package includes upgrades to Taiwan's F-16 fighter fleet, a five-year extension of F-16 pilot training at Luke Air Force Base in Arizona and spare parts for the upkeep of three different planes used by the Taiwanese, according to State Department spokeswoman Victoria Nuland. The deal is part of the U.S. Foreign Military Sales program.