About 50 people have been arrested in Minneapolis as the state plans to send in 1,700 National Guard soldiersātwitter.com/i/web/status/1ā¦VT

A 19-year-old man was killed after shots were fired into a crowd of protesters in Detroit from an unknown suspect iātwitter.com/i/web/status/1ā¦KC

Minnesota Gov. Tim Walz delivers a late night address to his state as protests continue in Minneapolis and around tātwitter.com/i/web/status/1ā¦1X 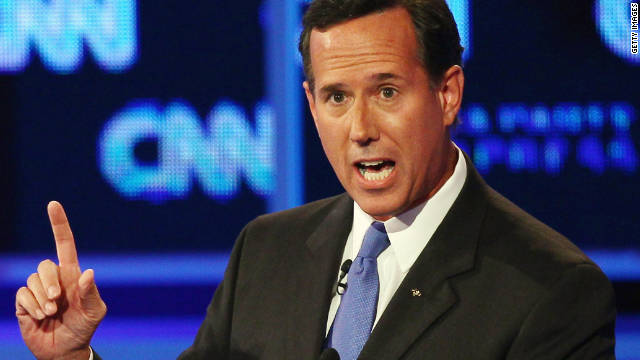 Overheard on CNN.com: Maybe you should change your name?

"Who the hell is this guy named Santorum you people keep talking about? I think it's pretty unfortunate he shares his name with a sexual biproduct. No, Google should make no changes."–gtown03gp

Santorum asks Google to clean up search results for his name

After presidential candidate Rick Santorum compared homosexuality to pedophilia and bestiality, a lewd definition for "santorum" appeared in Google search. Gay-rights supporters had launched a campaign to redefine his name, and it worked. Santorum wants Google to repair the damage, but the company says it has a history of non-interference in such matters. CNN.com readers were largely unsympathetic.

spittingoutt said, "Sorry Rick, but that's what you get for being an ignorant, hate-filled bigot. Reap what you sow." Boniface said, "If he's going to make ignorant and discriminatory and inflammatory remarks in public, he better get used to the fallout from it. I have zero sympathy for him."

DeweyFleszar said, "The Google algorithm doesn't lie, and Google should not artificially change their search results because he is running for president and is upset by the results of his actions in 2003. You've made your bed, Rick – now lie in it."

Moby52 said, "Rick, funny how you, a constitutional conservative, want to limit free speech when you don't like the results. That same attitude got you in this problem in the first place. I guess you will never learn that being a hypocrite is a curse."

timothyliao said, "I am a Conservative but this is a case of Rick Santorum being stupid and not knowing how the Internet works. Stick to your guns, Google, don't censor yourselves for the sake of others except for minors."

tilityboard said, "This is not simply a Google problem. All three major search engines (Bing, Google, Yahoo) list the definition of 'Santorum' as their first result. The real problem here is Rick Santorum! Why is this guy even running for president? Is it just an effort to legitimize the tea party fantasy of Michele Bachmann's electability?"

sonicblew said, "If a GOP 'candidate' can't even beat an UrbanDictionary listing in Google, how does he expect to topple a Democratic incumbent?"

LoCus2021 said, "The best part is the more he keeps bringing it up, the higher results it's going to get and will stay there."

After more than 30 years and the completion of "Collapse into Now" six months ago, R.E.M. band members are walking away "as great friends," said band guitarist Peter Buck. Many CNN.com readers said the band's music was the soundtrack to their own lives.

miamitalian said, "I just lost my religion :(" 9Destiny9 said, "There are some not so 'shiny happy people' out there today." monkeyland said, "I feel fortunate that I could associate a couple of their albums with the formative years of my teenage life."

Jimee said, "I count REM with Nirvana, Green Day, Counting Crows and U2 as the soundtrack of my coming of age. 'Nightswimming' is my favorite song, but 'Stand,' 'End of the World,' 'Shiny Happy People,' 'Man on the Moon,' 'Everybody Hurts,' 'What's the Frequency Kenneth' are all great songs.

18E said, "I was in Columbus Ga for a few weeks in 1981. Somewhere in the south, one weekend, I had seen REM perform at a club. I was sold then and all these years later. REM is the epitome of American modern and alternative rock. Thanks, REM."

pokethekat said, " ... I'm sad and grateful for all their music. I saw their two sold out shows at RedRocks a few years ago. Mike came into the crowd and started a frenzy. It was perfect. ... and they were."

Many CNN.com readers said R.E.M. influenced the history of rock music. ErichX101X said, "U2 and REM right about the same time were taking rock into a whole new direction."

vmm said, "R.E.M. is the original Indie band. Many, many great albums including Murmur, Life's Rich Pageant, New Adventures in Hi-Fi, Up, Green, Reckoning, Chronic Town. Amazing how popular they got without any significant backing from a big label. People knew about them from word of mouth. Really changed the music scene... showed it was possible to make it big without payola."

Roostalee said, "They were pioneers throughout the 80s, experimenting and creating as only young, hungry musicians can do. After that, their sound changed radically and I think the songwriting wasn't as strong as before. I'll miss them, but I've missed the 'original' REM sound for many years."

mlutherbling said, "They influenced Nirvana and Pearl Jam and everyone worth listening to in the last twenty years." bolanite said, "They went out with dignity and a huge catalog of amazing and varied recordings."

Is Facebook a has-been? According to writer Matt Rosoff, the social network company has lost its "wow" factor and is "no longer the challenger." Most CNN.com readers agreed. GPeterse said, "Facebook has had some of the most brilliant ideas in social computing ... roughly six months after someone else had the same idea."

9Destiny9 said, "I quit using Facebook three months ago when I got google+; it's simply better at everything. Some people have been complaining that 'no one is on it,' but that's good. I hope it remains the social network for tech savvy adults."

dcdavid said, "Facebook's new moto? If it ain't broke, break it!" KtinME agreed, "I don't get why they need to keep changing how you do things. I use it for business, but it is getting more complicated all the time to manage."

carlaAxelson said, "I finally got my mom on f/b and it's too complicated for her. I loved Facebook up until about 2 changes ago. Bigger is not always better. You guys are way over-complicating things."

drowlord said, "Facebook really needs to fix its core features. The whole 'wall' thing sucks if you befriend media, companies and products, and join a few groups. It was fine when the service did one thing, but as it has grown, it's become an unreliable source of social content. I should be able to view just my friends' stream or my family's stream, unless I want to see more."

mimns8 said, "I left yesterday – it was liberating." FiatJusticia said, "The Facebook phase is finally on the downhill slope ... thank GOD." MidBlue said, "The entire FB thing is a fad; like so many dot-bombs before, they will eventually go away."

But some CNN.com readers said Facebook was still quite useful, if not amazing. Susanhh said, "I don't know if Facebook really needs to 'wow' users anymore; I think that's what's getting it in trouble. I don't foresee a great migration out of it. It is ubiquitous: My non-techy grandma is on it, for instance, and to get her to change to something else would be a battle. So, just settle down Facebook, would be my advice."

MediaMartyr said, "I like Facebook. Helps me keep in touch with my family and far-away friends very easily. I guess the rest of you really need something to hate. Well, I hate eggplant. Always have."

By day seven of the study, 29% of the patients were either on a ventilator or had died cnn.it/2XGU2YU
cnni

7:32 am ET May 30, 2020 RETWEET
The next attempted SpaceX-NASA launch is scheduled for this afternoon but thunderstorms and lightning could once agātwitter.com/i/web/status/1ā¦Ms
CNNweather

7:16 am ET May 30, 2020 RETWEET
Denzel Washington is being called a "good Samaritan" for helping a distressed man. He pulled over because he saw aātwitter.com/i/web/status/1ā¦ws
cnni

7:01 am ET May 30, 2020 RETWEET
RT @CNN: A 19-year-old man was killed after shots were fired into a crowd of protesters in Detroit late Friday, the city's police departmenā¦
cnni