Acting Navy Secretary Thomas Modly apologized for telling the crew of the USS Theodore Roosevelt that the ship's noŌĆtwitter.com/i/web/status/1ŌĆ”eL

RT @CNNBusiness: US stocks had their best day in two weeks, closing near session highs on optimism about a slowdown in new coronavirus infeŌĆ”

UK Prime Minister Boris Johnson is in intensive care a day after being hospitalized with coronavirusŌĆtwitter.com/i/web/status/1ŌĆ”E3

The United States has at least 10,335 reported deaths from coronavirus, according to a tally by Johns Hopkins UniveŌĆtwitter.com/i/web/status/1ŌĆ”Ec

The US Supreme Court says a Kansas law enforcement official was justified in stopping a vehicle after learning theŌĆtwitter.com/i/web/status/1ŌĆ”Pt 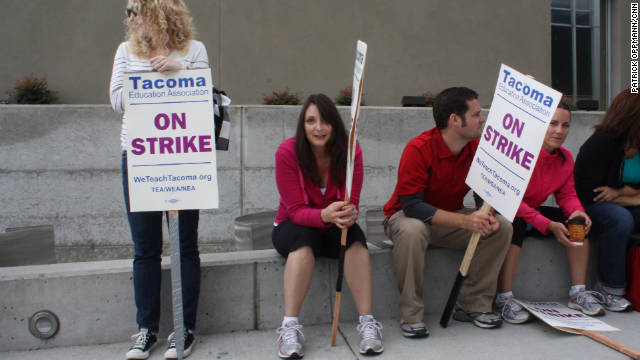 A lawsuit that the school district had filed against the teachers' union will be dropped, Voelpel said.

A tentative agreement was reached Wednesday.┬ĀContract talks between the school district and union hadfractured over teacher pay, class size and how educators are transferred between schools.

In the deal that teachers accepted Thursday, according to Voelpel, class sizes will remain the same (the union had pushed for smaller class sizes); teachers will not face a pay cut (the district to cut pay by 1.35%); and a joint committee appointed by the district and union will determine how teachers are transferred.

Across Washington, state services cuts are in the works after the governor's office last week said the state is expected to collect $1.4 billion less in revenue between now and June 2013 than previously forecast.

10:00 pm ET April 6, 2020 RETWEET
This zoo has been trying to get two giant pandas to mate for 10 years. But now, staff at the park, which is closedŌĆtwitter.com/i/web/status/1ŌĆ”1k
cnni

9:47 pm ET April 6, 2020 RETWEET
Acting Secretary of the US Navy Thomas Modly has apologized for calling the now-ousted commander of the USS TheodorŌĆtwitter.com/i/web/status/1ŌĆ”Cx
cnni