A Chicago woman in her 60s is confirmed to have the second identified US case of the Wuhan coronavirus, the CDC sayŌĆtwitter.com/i/web/status/1ŌĆ”oO 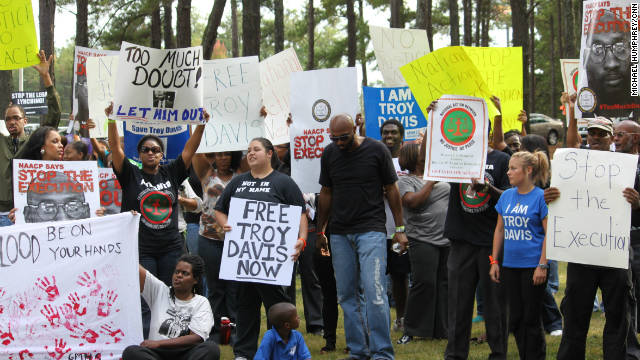 Hundreds of protesters gathered in Jackson, Georgia, on Wednesday in the hours before Troy
September 23rd, 2011
07:45 PM ET

In the hours before Troy Davis was executed in a Jackson, Georgia, prison Wednesday for the murder of a police officer, the hundreds of people who had gathered outside not only protested his sentence, but also talked of bringing about reforms for the future.

During the hot day and┬Āinto the evening, high-profile activists, college students and others said there was too much doubt over Davis' guilt for an execution (though the prosecutor said he had no doubt). And some expressed hope that the death penalty eventually would be abolished.

In a crowded church across the street from the prison, the head of Amnesty International, Larry Cox, drew raucous applause with a nod to the Christian belief in an afterlife.

"We are not afraid of death, because we know that death can be conquered," he said.

Many spoke about reforming the justice system. Elijah West, a cousin of Davis, spoke of getting a degree in criminal justice so that he could make changes from the inside.

Ben Jealous, head of the NAACP, called the death penalty "legalized vengeance" and urged the protesters to oppose it.

Protests were not isolated to Jackson, and they did not end with the execution. CNN iReporter Julio Ortiz-Teissonniere captured images of a protest involving at least 200 people in New York's Union Square on Thursday, the day after the execution. The event was half memorial and half protest, he said. While there, he grabbed a flier advertising an upcoming demonstration with a similar theme.

In Georgia, one man who spoke to loud cheers at the Jackson protest said Friday that the experience transformed him. Killer Mike, an Atlanta rapper and activist, said he has already begun organizing people to work for the change he sees as necessary.

"I'm telling people to register to vote, especially African-American males, so they can get involved in the judicial process," he said.

While race factors heavily in the entertainer's work - he says he speaks to the "psychology of young black men that machismo can protect you" - he left Jackson with a sense of unity.

Click the audio player to hear more about the Jackson protest from CNN Radio's Emma Lacey-Bourdeax:

4:31 am ET January 25, 2020 RETWEET
Snakes ŌĆö the Chinese krait and the Chinese cobra ŌĆö may be the original source of the newly discovered coronavirustwitter.com/i/web/status/1ŌĆ”phln7T
cnni

3:31 am ET January 25, 2020 RETWEET
Several members attending a furry convention in California helped restrain a man who was assaulting his girlfriendŌĆtwitter.com/i/web/status/1ŌĆ”nO
cnni

3:16 am ET January 25, 2020 RETWEET
Golf-ball sized hailstones rained down on parts of southeastern Australia on Monday. The white balls of ice wereŌĆtwitter.com/i/web/status/1ŌĆ”ZP
cnni