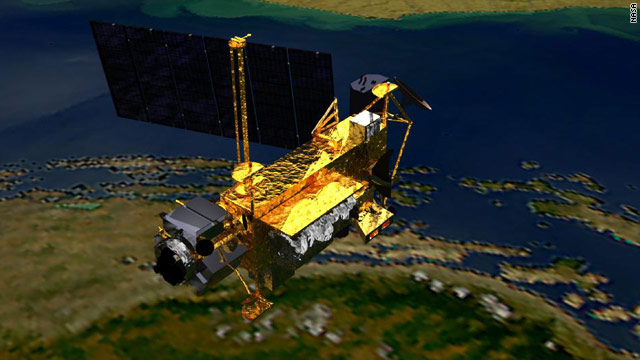 This is an artist's rendition of the satellite that is expected to fall to Earth on Friday or Saturday.
September 23rd, 2011
11:18 AM ET

[Updated at 11:18 a.m. ET] The United States is back as a possible - but unlikely - landing site for a satellite that will be crashing to Earth on Friday or Saturday, NASA says.

The Upper Atmosphere Research Satellite, or UARS, will re-enter the Earth's atmosphere sometime Friday night or early Saturday Eastern Time, according to the space agency. It's too early to predict the time and location of re-entry with precision, but NASA can no longer rule out the United States as a landing spot.

"There is a low probability any debris that survives re-entry will land in the United States, but the possibility cannot be discounted because of this changing rate of descent," NASA said on its website.

Though much of the satellite will burn up as it re-enters the atmosphere, 26 pieces - or about a half-ton of the 6-ton craft - have a good chance of surviving, NASA says.

Because water covers about 70% of the Earth's surface, NASA believes most if not all the debris that survives will land in an ocean or sea. And even if pieces strike dry land, there's very little risk any will hit people.

Objects this size re-enter the Earth's atmosphere about once a year, according to NASA. This is the largest NASA satellite to re-enter in about 30 years, but at 6 tons, it's only a fraction of the size of the 75-ton Skylab that fell back to Earth in 1979. Portions of it hit Western Australia.

The space shuttle Discovery released the satellite on September 15, 1991.

"Originally designed for a three-year mission, UARS measured chemical compounds found in the ozone layer, wind and temperature in the stratosphere, as well as the energy input from the sun," NASA's website says. "Together, these measurements helped define the role of Earth's upper atmosphere in climate and climate variability."