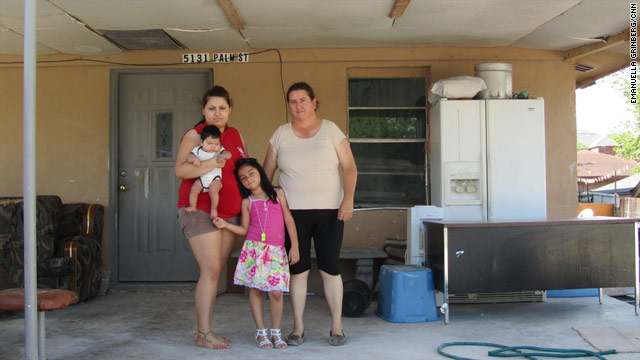 Gavina Barrera raised four children in her home, including a daughter who still lives there with her own children.
September 23rd, 2011
04:56 PM ET

"We donŌĆÖt have any funding right now," said Martinez, director of Colonias Unidas, the community center in Las Lomas that usually hosts the after-school program. "We're just hanging on by a string."

Colonias Unidas' primary source of funding comes from revenue from mailboxes the center rents to Las Lomas┬Āresidents. That money ran out after this year's summer program, which provided the children of Las Lomas with lunch and a place to play four days a week, Martinez said.

CNN visited Las Lomas in July, when the summer program was in full swing. Gavina┬ĀBarrera, a resident of Las Lomas, showed us around the community, which is known in bureaucrat-speak as a "colonia," or an unincorporated settlement usually lacking water, sewage systems, sanitation or electricity.

In Las Lomas, in unincorporated Starr County about an hour from McAllen, median household income was $22,418 in 2009.

Explore the country by the numbers on CNN.com's census map

Barrera, a naturalized U.S. citizen who moved to Las Lomas┬Āin 1984, has seen the colonia grow from a shanty town to a neighborhood with paved roads and drainage systems. It may be substandard to many Americans, but given the progress of the past 20 years, it's a place Barrera is proud to call home.

But with each step forward, it seems another hurdle arises.

Colonias Unidas held an after-school program last year from September to May, she said. From Monday to Thursday, high school students provided homework help to younger children, receiving a stipend as incentive. This year, the money ran out before fall, Martinez said.

In the meantime, residents look forward to the little things, she said. Colonias Unidas┬Āholds a monthly "mercadito," where residents can sell handmade crafts or used household items. In October, architecture students from Texas A&M University will build a playground on the community center's grounds.

"That's something we look forward to. It gives motivation to the community, and that's important when you have little in the way of wealth or material possessions." she said. "People live simple lives here, but basically, as long as they're safe and their families are safe, they're happy."

The World Cup match between Portugal and Uruguay was briefly interrupted by a pitch invader waving a rainbow flag oŌĆtwitter.com/i/web/status/1ŌĆ”ha
cnni

4:00 pm ET November 28, 2022 RETWEET
The families of IranŌĆÖs World Cup soccer team have been threatened with imprisonment and torture if the players failtwitter.com/i/web/status/1ŌĆ”xPyP
cnni

3:00 pm ET November 28, 2022 RETWEET
The Great Barrier Reef should be added to the list of world heritage sites that are ŌĆ£in dangerŌĆØ, a team of scienttwitter.com/i/web/status/1ŌĆ”lWZdis
cnni

1:14 pm ET November 28, 2022 RETWEET
ŌĆ£The man, who was accused of killing 10 Black people in June, was charged on 25 counts, including murder, domestictwitter.com/i/web/status/1ŌĆ”mHWq
susancandiotti

The White man accused of killing 10 people and injuring more than a dozen at a grocery store in a predominantly BlaŌĆtwitter.com/i/web/status/1ŌĆ”Hm
cnnbrk

11:10 am ET November 28, 2022 RETWEET
The US government gives Chevron limited authorization to resume pumping oil from Venezuela after reaching a humanitŌĆtwitter.com/i/web/status/1ŌĆ”5q
cnnbrk