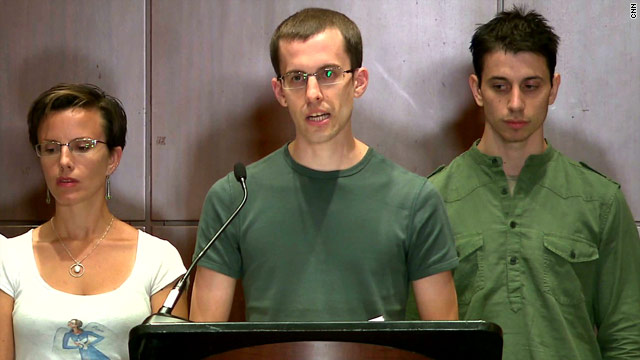 "We lived in a world of lies and false hope," said Josh Fattal, an American who on Sunday described his and fellow hiker Shane Bauer's two years in solitary confinement in an Iranian prison as "the worst experience of our lives."

"They told us ... falsely that we would be given due process and access to our lawyer," Fattal said. "The most infuriating, they even told us that our families had stopped writing us."

Fattal said he and Bauer did not know they would be freed when guards at the prison led them - not blindfolded back to their small solitary cells as had been customary - but instead to a room downstairs to get fingerprinted and get their street clothes.

Then, they were brought to a room where they met Salem al-Ismaily, the envoy of Oman's Sultan Qaboos bin Said. The first thing that al-Ismaily said to the two, according to Fattal, was: "Let's go home."

Fattal and Bauer at one point launched a hunger strike "just to receive letters from our loved ones," Fattal told reporters.

In their two years in custody, Fattal said he and Bauer spoke to others on the phone for a total of 15 minutes and had a brief visit with their mothers. Besides that and sporadic conversations with their lawyer, they had no communication with the outside world.

Bauer said he and Fattal were detained by Iranian authorities not because they'd crossed an unmarked border between Iran and Iraq, but "because of our nationality."

"We were convicted of espionage because we are American. It's that simple," he said. "No evidence was ever presented against us. That is because there is no evidence and because we are completely innocent."

Bauer said he cannot bring himself to forgive Iran's government for its actions - not just against him and his fellow detained American hikers, but also against "so many other innocent people and prisoners of conscience."

"If the Iranian government wants to change its image in the world, and ease international pressure, it should release all political prisoners and prisoners of conscience immediately," Bauer said.

"The only explanation for our prolonged detention is the 32 years of mutual hostility between America and Iran," Bauer said. "The irony is that (fellow once-detained hikers) Sarah (Shourd), Josh (Fattal) and I oppose U.S. policies towards Iran, which perpetuate this hostility."

He added that he believes that reports of abuses and poor conditions in CIA-run prisons, prisons inside the United States and at the military detention center in Guantanamo Bay, Cuba, "provide an excuse for other governments, including the government of Iran, to act in kind."