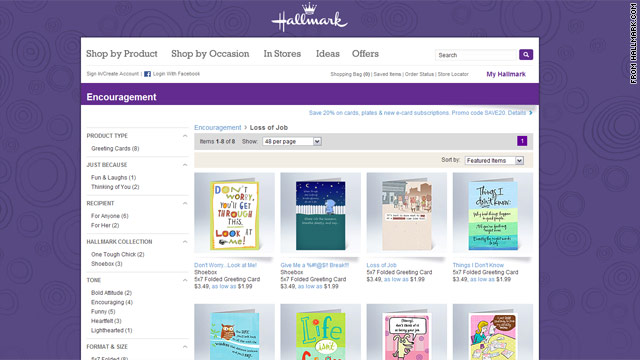 “People in times of need will always need to connect and when the consumers have asked us for a way to connect in those difficult situations, we try to respond in an authentic way and we think that what the greeting card does is offer a bridge,” Hallmark’s creative director Derek McCracken told NPR’s All Things Considered.

Those that work with the unemployed say they don’t think it’s a bad idea. “Getting a card like that and somebody caring is fabulous,” Michelle Crowthers-Lunczynski of Work One in Franklin, Ind. told CNN affiliate WTHR in Indianapolis, Indiana. “The crazy part to think about this is there's so many people laid off. At least someone's caring enough to you know, get a card and say, 'I'm thinking of you.'”

According to McCracken, the idea to produce cards that lift the spirits of the recently unemployed came from the company’s own customers, who were asking for a card addressing a topic that hits close to home for so many people.

“They sent us letters. They phoned it in. They asked their retailers, you know, in their neighborhood, where do I find a card that said this?” he said. “Loss of job, like any loss, is a grieving process. And so we have to acknowledge as soon as possible what had happened and then try to support them. So that's where we kind of offer more cards on the, you'll get through this, versus dwelling on the loss of the job itself.”

The job-loss sympathy cards are not currently available at all of the company’s 40,000 locations nationwide, but Hallmark’s website lists several of the 5×7 cards on-sale for $3.49 each.

E-card companies have also latched on to the idea, but American Greetings, a main competitor of Hallmark’s in the world of paper and electronic cards, has yet to produce any layoff-specific products. Spokesman Frank Cirillo says that the idea is something that American Greetings might look at in the future, but it hasn’t seen a demand for the cards because the company focuses on personalized products that are open-ended and conversational enough for consumers to add in their own more specific messages.

Hallmark’s cards range widely in tone: Some of them contain messages that are more on the sentimental side and offer inspirational advice, while many are lighthearted and even make light of the recipient’s situation. One card reads: “Don’t think of it as losing your job. Think of it as a time-out between stupid bosses.” Another says: “Don’t worry, you’ll get through this. Look at me! Okay, maybe don’t.”

“The ones that offer more moral support, but maybe with a little humorous twist in a more encouraging fashion are doing very well and we're publishing more of those,” McCracken said.