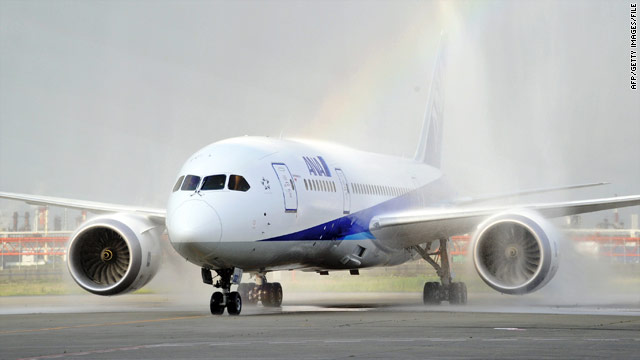 ANA Dreamliner: Boeing delivers its first 787 Dreamliner today, handing over the airliner to All Nippon Airways at a ceremony at Boeing's facility in Everett, Washington.

The plane is the first commercial airliner to be made mostly of carbon composites or super durable plastic. Those materials mean a lighter plane that Boeing says could use 20% less fuel than conventional airliners, making way for a more environmentally-friendly and cost effective aircraft option for airlines.

So far, according to Boeing, the manufacturer has more than 800 orders for the 787 Dreamliner, which has a list price of about $200 million each.

The interior of the plane also sports a variety of upgrades. Gone are traditional plane window shades. Instead, a button on the window allows passengers to gradually darken their surroundings.

All Nippon Airways has ordered 55 Dreamliners.

Palestinian statehood: The historic Palestinian bid for statehood goes before the United Nations Security Council Monday, where it looks set for a largely symbolic debate in the face of a promised American veto.

While a U.S. veto would block the bid for full U.N. membership, the General Assembly could still vote to upgrade the status of Palestinians, who currently hold the status of non-voting observer "entity."

The body could change that status to permanent observer "state," identical to the Vatican's standing at the United Nations.

Washington Monument: National Park Service officials will hold a news conference Monday afternoon to offer details on damaged sustained by the Washington Monument during the 5.8-magnitude earthquake that struck the East Coast on August 23.

The service has been working with an engineering firm to determine the extent of the damage and what it will cost to fix it.

The monument has been closed to the public since the earthquake.