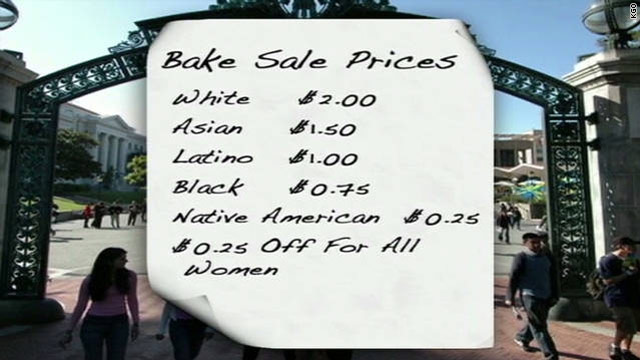 "I tend toward the liberal side but this Republican student group is right on this one, and they have found a clever way to make their point. Kudos to them and their right to political discourse."–Luisarana

Want to buy a cookie from the UC Berkeley Campus Republicans? If you're a white guy, you'll pay more. The group is planning the Tuesday bake sale as a protest against affirmative action legislation proposed for California universities. "We agree that the event is inherently racist, but that is the point," BCR President Shawn Lewis wrote in response to upheaval over the bake sale. "It is no more racist than giving an individual an advantage in college admissions based solely on their race (or) gender."

Some CNN.com readers thought it was a brilliant ploy, and others said it could be turned to the opposition's advantage.cul8rv8 said, "Seems to me they are getting the message out there, and people are disgusted with the idea they can have prices based on race. It's just as awful that colleges look at a person's race as a deciding factor for college admission. You can't disagree with this bake sale without disagreeing with what they are protesting against."

Many CNN.com readers said that they supported affirmative action based on economic, not racial, diversity. ranger978275 said, "I'm all for helping the poor pay for school, but not on the basis of race. If you're a minority and you get help, a white person with the same financial background better get the same help too."

minervinator said, "Why should race have anything to do with admissions? I know blacks and Mexicans who were born and raised in suburban neighborhoods. I know white kids from Africa. What's more diverse: A white kid and a black kid from the same neighborhood with the same family structure and interests; or a rich white kid and a white kid from the projects who have different backgrounds, family life, and hobbies? If you think that Berkeley is promoting a positive message, congratulations, you're a racist."

But other readers said the odds were still stacked against minorities.

justingb said, "The campus Republicans left out how legacies (which we can agree are mostly white) are a HUGE consideration during the admissions process ... especially if you have deep pockets. bookldy209 said, "On the flip side, (the pricing) is a realistic comparison of relative income post-graduation."

Guest said, "Let's just pick one point in time because there's hundreds of years of advantage here: It's 1940. I'm a white male and I can go to college because I am a white male and I am the only type of person that can attend a major university. I do not have to compete with blacks, Latinos or women; they simply are not allowed to attend. My parents were allowed to go to college. They filled me with knowledge and confidence since I was born. Successful people had the same skin color as me. They were allowed to own businesses and buy land. I also could own a business or buy land or I could easily get a job with one of these white males. When my parents died they left me an inheritance from the wealth they were allowed to accumulate. I then was able to gather more wealth and my kids inherited knowledge, wealth, and social wealth from me. I wonder how my black counterpart has done? He and his parents weren't allowed to work, build wealth or get educated."