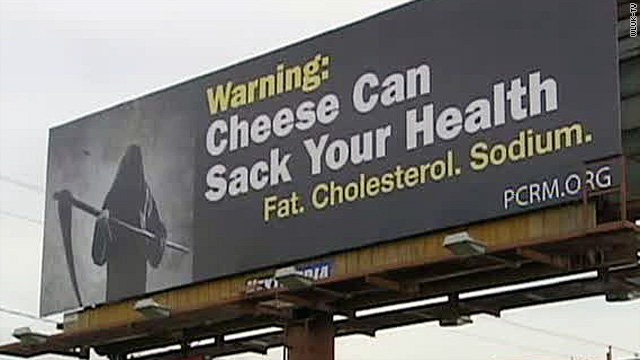 A billboard warning of the dangers of cheese consumption went up in Wisconsin on Tuesday, funded by a nonprofit.
September 27th, 2011
11:01 PM ET

Cheese lovers, brace yourselves: “Cheese can sack your health.”

That’s the message on a billboard near Wisconsin’s Lambeau Field, home of the NFL’s Green Bay Packers. And yes, that is the same state that leads the United States in cheese production.

A nonprofit based in Washington, Physicians Committee for Responsible Medicine, posted the anti-cheese billboard on Tuesday after conquering some legal issues.

The poster was initially going to depict the grim reaper wearing a cheesehead hat, with the words “Warning: Cheese can sack your health,” to alert passersby who saw the billboard – who would ideally be football fans, according to PCRM.org. However, Foamation Inc., the company that manufactures cheesehead hats, threatened a copyright lawsuit, forcing the organization to remove the cheesehead from its poster, according to the nonprofit’s website.

The PCRM billboard had the grim reaper wearing a cheesehead hat before manufacturers insisted it be removed from the poster.

“We’re happy,” Foamation’s office manager Denise Kaminski told “The Chippewa Herald,” a newspaper based in Wisconsin. “The cheesehead is a fun thing, so we’re glad that has happened.”

Physicians Committee for Responsible Medicine said the focus is on health issues.

“The key message is that cheese can hurt your health,” Neal Barnard, the organization's president, said in a press release. “Cheese is the No. 1 source of saturated fat in the American diet. Parents often have no idea that this high-fat product could be causing their children’s weight problems.”

“It ought to come with a warning label so consumers understand the health risk,”
Susan Levin, nutrition education director for the physicians committee, said in the release.

"I think most consumers understand this for what it is,” said Wisconsin Milk Marketing Board member Patrick Geoghegan, according to affiliate WBAY. “It's misinformation - it’s typical of what PCRM does."

“I think this is kind of silly,” the mayor said, according to WBAY. “I think it’s attacking something - more for PR. There are so many other things that they could be working on.”

But the nonprofit wants the billboard to be visible to fans driving via Route 41 to Sunday’s football game at Lambeau Field, as the Packers face the Denver Broncos, in hopes of influencing a lifestyle change.