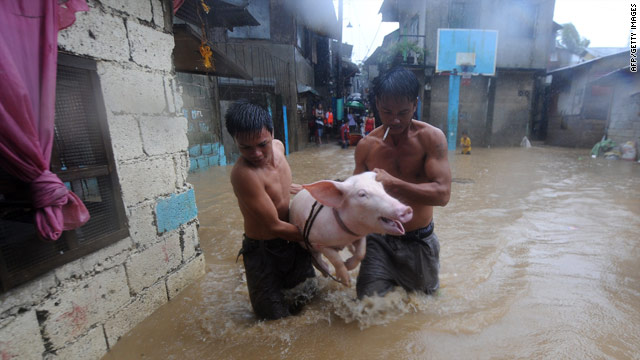 Philippine typhoon: As many eight people were dead and almost 2 million without power as Typhoon Nesat slammed into the Philippines with torrential rains and winds up to 87 mph.

Among the dead were a grandmother and her three grandchildren killed when a wall of their home collapsed on them, the Philippine Star reported. They were among eight killed across the country, according to a report on Inquirer.net.

In metro Manila, 1.9 million of Manila Electric Co. were without power, according to a report from the Philippine Daily Inquirer.

The typhoon, known in the Philippines as Pedring, made landfall about 190 kilometers (120 miles) north of Manila about 5 a.m. Tuesday (5 p.m. Monday ET), according to the Philippine national weather agency. The storm was dumping up to 25 millimeters (1 inch) of rain per hour as it moved across the country.

Nesat was expected to cross the archipelago and head toward southeastern China.

The National Park Service announced Monday that experts have completed an interior assessment of the monument and found it to be structurally sound.

Their "difficult-access team will install climbing ropes and safety lines on all four sides of the monument, then clip on to those lines and exit the monument from the windows at the observation level," Vogel said. Weather permitting, they will climb up the pyramidion and then descend the length of the monument looking for exterior damage.

Women in combat: Women in the Australian armed forces will be able to serve in front-line combat roles, the government said Tuesday.

The new plan will be phased in over a five-year period.

Australia's decision makes it one of only a few countries in the developed world with no restrictions for women in combat. Canada and Israel are among the other nations that allow so.

Around 17,000 earthquakes have hit the southwestern region of Reykjanes over the past week, according to the Icelanâ€twitter.com/i/web/status/1â€¦QG
cnni