Trump has paid no federal income taxes whatsoever in 10 of the past 15 years beginning in 2000, a New York Times re‚Ätwitter.com/i/web/status/1‚Ä¶By

Joe Biden: "Never before in our nation's history has a Supreme Court justice been nominated and installed while a p‚Ätwitter.com/i/web/status/1‚Ä¶S8 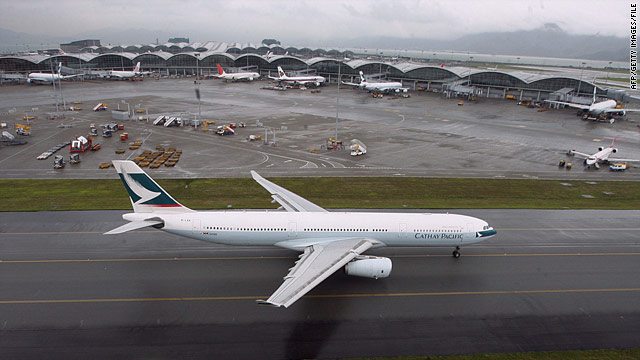 Report: Jetliners within six seconds of collision over Hong Kong

Two jetliners carrying more than 600 passengers and crew came within seconds of a collision near Hong Kong last week, according to a report in The Standard newspaper.

The Cathay Pacific Boeing 777 and Dragonair Airbus A330 were about a mile apart when their collision avoidance systems issued alerts, according a Cathay Pacific statement. The pilots of the jetliners took evasive action to maintain a safe distance from each other, the Cathay statement said.

‚ÄúThere was no risk of collision and at no time was the safety of the flights compromised. At the closest, they were one nautical mile (2,000 meters) apart when abeam from each other with increasing vertical separation," the Cathay statement said.

But Hong Kong's former civil aviation chief Albert Lam Kwong-yu told The Standard that, based on normal speeds of the airliners involved, they were about six seconds from colliding.

"The chance of a crash is absolutely high," the paper quotes Lam as saying. "The passengers really came back from hell."

The flights involved in the September 18 incident were Cathay 841, en route from New York to Hong Kong, and Dragonair 433 from Kaoshiung, Taiwan, to Hong Kong. The Cathay jet had 317 people aboard and the Dragonair jet had 296 aboard, according to aviation officials.

At the time of the incident, several jetliners, including the Dragonair jet, were in a weather-related holding pattern about 40 miles southwest of Hong Kong International Airport, according to a statement from Hong Kong's Civil Aviation Department.

As the Cathay jet approached the holding area, its pilots told air traffic control the 777 had "only 10 minutes' holding fuel" remaining. Another Cathay plane offered to switch landing slots with the 777 and controllers issued directions to both the 777 and the Dragonair A330 as they tried to rearrange the pattern, the aviation department said. During that time, both the Cathay and Dragonair jets failed to respond to an air traffic control command, the department said. The collision avoidance systems were activated after those instructions were missed and the planes went below minimum separation distances, the report said.

The aviation department said there was no risk of a collision, but that it would "conduct a comprehensive investigation" into the incident, including looking air traffic control procedures used during bad weather.

There have been four other near-miss incidents in Hong Kong during the past 11 years:

- In September 2010, a Cathay Pacific plane taking off for London after midnight had to deviate from the runway center line at high speed because the tail of another plane was too close to its path.

- In July 2006, a Dragonair Airbus and a Northwest Airlines Boeing - both heading for Tokyo - were reported 100 meters apart vertically while 80 nautical miles east of the Hong Kong airport.

- In September 2004, a China Southern Airlines plane leaving Hong Kong and an incoming Malaysia Airlines cargo plane came within 304 meters of each other 55 nautical miles south of the airport.

In June 2001, a Dragonair Airbus to Shanghai and a Cathay Pacific flight arriving from Seoul were reported 210 meters apart 110 nautical miles east of Hong Kong.

A federal judge blocks -- for now -- a US government ban on downloads of TikTok just hours before the policy was se‚Ätwitter.com/i/web/status/1‚Ä¶ft
cnni

2:39 am ET September 28, 2020 RETWEET
A giant robot resembling the 1970s anime figure Gundam has been tested in Yokohama, Japan. The robot stands at near‚Ätwitter.com/i/web/status/1‚Ä¶jG
cnni

2:31 am ET September 28, 2020 RETWEET
Donald Trump paid no federal income taxes whatsoever in 10 out of 15 years beginning in 2000 because he reported lo‚Ätwitter.com/i/web/status/1‚Ä¶fS
cnni

2:21 am ET September 28, 2020 RETWEET
US President Trump and his campaign often share manipulated videos on social media. It is defended as humor, but hi‚Ätwitter.com/i/web/status/1‚Ä¶TB
cnni

2:01 am ET September 28, 2020 RETWEET
At least 16 workers in southwest China were killed after they became trapped underground in a coal mine and exposed‚Ätwitter.com/i/web/status/1‚Ä¶dP
cnni