The accused gunman in the mass shooting at a Buffalo supermarket was indicted by a grand jury on Wednesday, accordiŌĆtwitter.com/i/web/status/1ŌĆ”6O

Authorities have arrested seven people in an alleged SAT cheating scam at a Long Island, New York, high school and are investigating whether the cheating extends to other schools.

Samuel Eshaghoff, 19, of Great Neck, New York, was arrested Tuesday on felony fraud charges that could result in four years in prison if he's convicted, the Nassau County District Attorney's Office said. Six students face misdemeanor charges. Their names are not being released because they are minors. 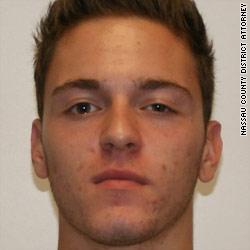 Prosecutors allege Eshaghoff impersonated six Great Neck North High students between 2010 and 2011, charging between $1,500 and $2,500 to take the SAT test for them. Eshaghoff would take the test at schools other than Great Neck, where proctors would not be familiar with the students' identity, and present fake, unofficial identification, prosecutors say.

Nassau County District Attorney Kathleen Rice said authorities uncovered the scam after hearing rumors of cheating, comparing the test scores of suspects to their school grade-point averages, and finding a "wide gulf" in the cases of the six suspects. The district attorney's office said it is investigating possible cheating scams at two other Nassau County high schools as well as possible further instances involving Eshaghoff.

Eshaghoff's attorney, Matin Emouna, said his client has pleaded not guilty in the case.

And he said cheating on tests is something that should be handled in schools, not in criminal courts.

"At what point are you going to draw the line?" Emouna asked during a phone interview with CNN Wednesday. "No one has had a case like this in the U.S., and I think attorneys are going to have a field day with it."

The victims in the case are students who are denied┬Āadmission at the colleges of their choice by students who cheated, Rice said Wednesday on CNN's "American Morning."

"Honest kids should not be bumped out of college slots by kids who cheated," she said.

Rice called on the Educational Testing Service, the nonprofit which administers the SAT test nationwide, to establish procedures to combat cheating, including photographing students as they take the test and attaching the picture to the answer sheet.

"We need ETS to tighten security they have at these test centers," Rice said.

She also called on ETS to inform colleges if cheating is suspected. ETS currently deals with suspected cheating by canceling test scores and┬Āoffering refunds or retests or arbitration, according to the district attorney's office.

ŌĆ£Colleges look for the best and brightest students, yet these six defendants tried to cheat the system and may have kept honest and qualified students from getting into their dream school,ŌĆØ Rice said in a statement Tuesday.

Rice said authorities have no evidence implicating parents in the cheating scandal.

Great Neck North identifies itself as a high-performing high school, with a 97% graduation rate and almost 97% of students planning to pursue higher education.

"National publications consistently and historically have included Great Neck North High School among the top secondary schools in the country," the school says in a profile on its website.

The┬Ā mean scores achieved by Great Neck North students on SAT tests in 2010 were well above the national average, according to the profile.

Eshaghoff, a 2010 Great Neck North graduate, tested in the 97th percentile, Rice said. He is now enrolled at Emory University in Atlanta after attending the University of Michigan for his freshman year, the prosecutor's office said.

The next SAT test dates are this weekend and Rice said authorities would be vigilant.

ŌĆ£These arrests should serve as a warning to those taking the SAT this Saturday that if you cheat, you can face serious criminal consequences," Rice said.

Oklahoma lawmakers have passed a bill banning abortion from the moment of "fertilization." The measure now goes toŌĆtwitter.com/i/web/status/1ŌĆ”ZG
cnnbrk

3:42 pm ET May 19, 2022 RETWEET
The January 6 committee is investigating the tour a Georgia Republican lawmaker gave to visitors the day before rioŌĆtwitter.com/i/web/status/1ŌĆ”FR
cnnbrk

3:15 pm ET May 19, 2022 RETWEET
Marnie Schulenburg, a soap opera actress who documented her journey from becoming a new mother to a cancer patient,ŌĆtwitter.com/i/web/status/1ŌĆ”85
cnnbrk

12:22 pm ET May 19, 2022 RETWEET
The accused gunman in the mass shooting at a Buffalo supermarket was indicted by a grand jury on Wednesday, accordiŌĆtwitter.com/i/web/status/1ŌĆ”6O
cnnbrk

10:52 am ET May 19, 2022 RETWEET
President Biden will invoke the Defense Production Act, among other actions, in an effort to ease the national babyŌĆtwitter.com/i/web/status/1ŌĆ”H6
cnnbrk