The FBI is conducting "law enforcement activity" at the Washington home of Russian oligarch Oleg Deripaska, a close‚Ätwitter.com/i/web/status/1‚Ä¶Id

The powerful Haitian gang that abducted 17 US and Canadian missionaries, including five children, wants $1 million‚Ätwitter.com/i/web/status/1‚Ä¶tf 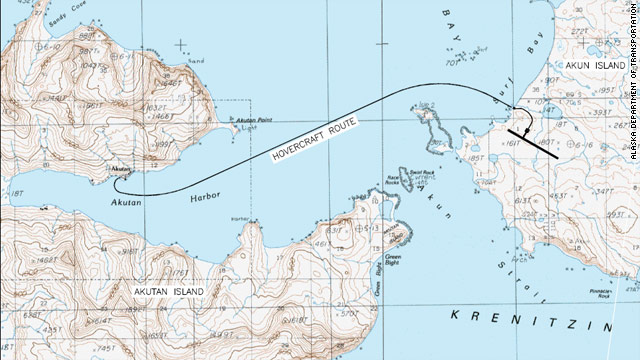 The route a hovercraft would take between the village of Akutan and the runway on Akun Island.
September 28th, 2011
12:56 PM ET

A $64 million runway for no one in Alaska?

Remember Alaska's "Bridge to Nowhere," a $400 million span that was supposed to connect Ketchikan to its airport on sparsely inhabited Gravina Island? The project gained infamy in 2005 as a waste of taxpayer dollars and the funds earmarked for it were withheld. The 8,000 residents of Ketchikan continue to be connected to their airport by ferry.

Fast forward six years and another remote Alaskan airport project is raising questions about how the government spends money.

The price this time is $77 million and the place is Akutan, a remote island village in the Aleutian chain, according to a report from the Alaska Dispatch.

By next winter Akutan is scheduled to have a 4,500-foot-long runway, built at a cost of $64 million ($59 million in federal and $5 million state funds), the Dispatch reports. The problem is, the runway is on Akun Island, 6 miles from the village across the treacherous waters of the Bering Sea. Plying those waters can be tricky with seas over 6 feet and winds above 30 mph.

Original plans called for using a hovercraft - at a cost of $11 million - to ferry passengers from Akutan to Akun. But, the Dispatch points out, the same model hovercraft planned for the route has proven unreliable under similar conditions elsewhere in Alaska. And when it did run, operating losses were in the millions.

Now, transportation officials are considering using a helicopter to ferry passengers from Akutan, according to the Dispatch report. Cost of that is still being determined.

Should officials get it all figured out and funded, who'll benefit? Akutan has a year-round population of 100, but that spikes to about 1,000 in the summer when Trident Seafoods processing plant, the largest seafood processing plant in North America, is in operation, the Dispatch reports. Trident is contributing $1 million to the project, the Dispatch says.

And why is this necessary? Air service to Akutan is now provided by World War II-era amphibious aircraft operated by Peninsula Airways. Those are becoming increasingly difficult to maintain, Peninsula Vice President Brian Carricaburu told the Dispatch.

Carricaburu also says the runway could cut the government's costs in one way. Peninsula Airways routes to Akutan are now subsidized by about $700,000 annually under the federal Essential Air Service program. Using bigger, more efficient aircraft could bring that cost down, he told the Dispatch.

But to reach that point, it looks like a lot of figurative bridges have to be crossed.

3:01 pm ET October 19, 2021 RETWEET
The Pfizer/BioNTech vaccine is 93% effective in preventing hospitalization due to Covid-19 among children ages 12 t‚Ätwitter.com/i/web/status/1‚Ä¶uF
cnni

2:30 pm ET October 19, 2021 RETWEET
This Indian couple had to use a cooking pot to get to the temple where their wedding was taking place, as the stree‚Ätwitter.com/i/web/status/1‚Ä¶Tl
CNNweather

2:25 pm ET October 19, 2021 RETWEET
Cryptocurrency investors finally got what they've been clamoring for as the first bitcoin-linked, exchange-traded f‚Ätwitter.com/i/web/status/1‚Ä¶Jx
cnni

1:45 pm ET October 19, 2021 RETWEET
Using e-cigarettes and other tobacco products to keep from relapsing to cigarettes doesn't appear to be effective,‚Ätwitter.com/i/web/status/1‚Ä¶hS
cnni