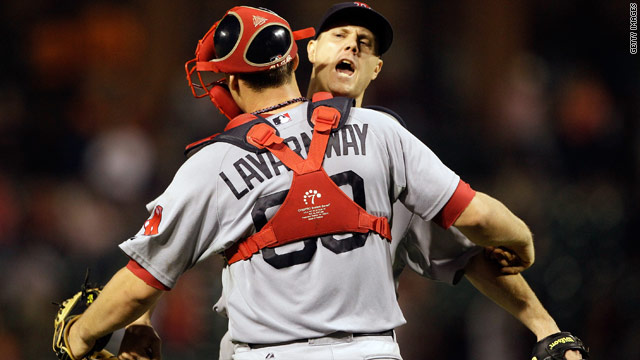 Red Sox relief pitcher Jonathan Papelbon and catcher Ryan Lavarnway celebrate getting the last out against the Baltimore Orioles on Tuesday.
September 28th, 2011
05:57 AM ET

Wild card races: Major League Baseball goes into the final day of the 2011 regular season with the wild-card playoff spots up for grabs.

In the American League, the Tampa Bay Rays and Boston Red Sox each won their games Tuesday night to remain tied at 90 wins, 71 losses, with one game to go in the 162-game regular season. The Red Sox, who beat the Baltimore Orioles 8-7 on Tuesday, face the Orioles again tonight in Baltimore. The Rays, who beat the New York Yankees 5-3 on Tuesday, host the Yankees in St. Petersburg, Florida.

In the National League, the Atlanta Braves fell to the Philadelphia Phillies 7-1 on Tuesday while the St. Louis Cardinals soared past the Houston Astros 13-6. The Braves and Cardinals are tied at 89 wins, 72 losses and face the same opponents Wednesday night. The Braves are at home against the Phillies and the Cardinals are in Houston.

SI.com's Joe Lemire looks at Tuesday's results and how the final day of the regular season shapes up.

Obama roundtable: President Barack Obama will answer questions about issues in the Hispanic community during an online roundtable Wednesday morning.

The event will be moderated by Jose Siade, Yahoo's editor-in-chief for U.S. Hispanic and Latin America. Obama will respond to questions submitted by readers of Yahoo, MSN Latino, and AOL Latino/Huffington Post Latino Voice on issues that affect the Latino community.

The president is expected to address the economy, education, health care and immigration.

The event called "Open for Questions With President Obama" or "El Presidente Obama Te Responde" will be streamed live on the White House website.

Loughner is scheduled to be at the hearing in Arizona to decide whether he should remain committed in Missouri or if he is competent to stand trial.

He is charged in the shooting rampage January 8 at a shopping center parking lot in Tucson that left six people dead, including a child and a federal judge. Thirteen others were wounded, including Giffords, a Democrat from Arizona.

The suspect could receive the death penalty if convicted.

CVS, Walgreens and Macy's said they are reviewing their requirements for facial coverings following new US CDC guidâ€twitter.com/i/web/status/1â€¦J4
cnni