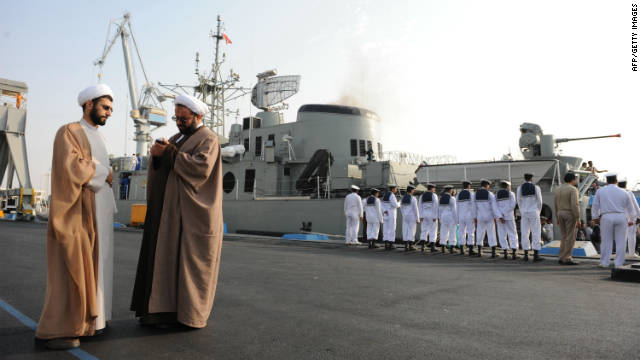 An Iranian state-run news agency reported that Iran is planning on sending ships to the Atlantic coast of the United States.
September 28th, 2011
04:47 PM ET

Overheard on CNN.com: The Iranians are coming? Not likely

As a U.S. Vet, I see no problem with them traveling near the East Coast as long as they are in international water, they are free to do so. If we go close to their country, they should be able to come close to ours. To say any different would not be fair and would be wrong. -MichDude

Iran may send ships towards the U.S.

According to a state-run Islamic Republic News Agency, Iran plans to send ships near the Atlantic coast of the United States. The story’s headline read: "The Navy of the Iranian Army will have a powerful presence near the United States borders.”

But the news didn’t rattle many CNN.com readers. Instead, most questioned or made jokes about Iran’s naval capabilities and commented about how they thought the U.S. would respond. A few readers said they were concerned.

USNavy818 said, “This is going to be pretty funny when they are thousands of miles from any friendly port and need to refuel, resupply, or get repairs and realize how expensive that will be. By the time they get to outside the U.S. they'll need more supplies unless all they bring are cargo ships.”

hopalong responded, “@usnavy, Where were you posted in the navy, in Utah? There is an island called Cuba 90 miles to the south of us, Venezuela is in northern South America and with money involved the nearest Exxon would probably be glad to help.”

SarahDerp said, “Upper atmosphere EMP attacks and low level sub torpedoes are the only things Iran could ever even dream of doing to us and those are limited enough to where they would only provoke us into stomping their country into the ground.”

erkinp said, “If this is true and not some B.S. bragging by the clerics that run the Islamic Republic of Iran, then the Iranian navel ships will most likely head for ports in Cuba. If not Cuba then to ports in Venezuela as they would run out of fuel and need to fill up on supplies.”

ModernWhig said, “This doesn't make sense. This could only be a red herring intended to distract the world from the Iranian navy's real target....Iran should know it can't get anywhere near our borders...and it DOES know.

reddog9500 said, “I'll bet Iran's sailors will be too tired to cause any trouble after rowing all that way.”

RatDiem responded, “Don't our attack submarines need some practice? We could always say they were hiking on our side of the border.”

couldbeprez1 said, “I hear they are bringing the biggest one they got... a 16 foot Lund.”

badidea said, “Their little boats are so cute!”

Todca said, “I'm sending a fleet of sea horses to meet them head-on.”

boxorayn said, “Hmmmm. So about six months ago the Iranian navy sends two ships through the Suez Canal to Syria (which is within missile range of Israel) and now they want to send ships to the Atlantic coast? Coincidence? Maybe, just very wary of coincidences.

Let's just say for argument's sake that one of their new friends 'in the area' (China, N. Korea, Russia and other former Soviet states, Pakistan, etc.) decided to supply them with a couple of nukes. Israel and half of the major East Coast cities could be gone instantly. Not liking this situation too much.”

raiders12 said, “And when the DoD budget gets axed, those $2-3 billion reactor refuels for the carriers might be on the board for cuts... "

soul357 said, “What's the possibility that they are going to try something? That they have a nuke?”

0HedgeTruth said, “Around the world Obama is perceived as such a weak and inept US President that every crackpot regime on the planet feels very safe to take a shot at the US without penalty.”

Guest responded, “No one fired a shot. And I'm guessing Osama felt safe, too. That worked out well for him.”

Guest said, “Biological warfare worries me some. I do hope we are ready to vaporize those ships if they stray a foot off course.”