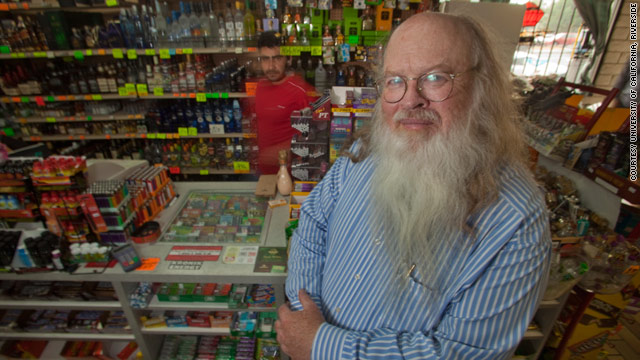 Two studies published this month suggest the availability of booze - and in one city, single servings of alcohol - is linked to violent crime rates.

University of California, Riverside researchers used federal crime data for offenders between the ages of 13 and 24, and then used census and economic data to determine the density of beer, wine and liquor stores in 91 major cities.

"Taking into account other factors known to contribute to youth homicide rates – such as poverty, drugs, availability of guns and gangs – the researchers found that higher densities of liquor stores, providing easy access to alcoholic beverages, contributed significantly to higher youth homicide rates," said a news release from the university.

The second study isn't so broad and doesn't deal solely with young people. It looked at San Bernardino, California, and "generally found higher rates of violent crime in neighborhoods around alcohol outlets that allot more than 10% of cooler space for single-serve containers."

Using census and business data combined with crime reports and an estimate of cooler space devoted to single-serving containers of alcohol (the latter being conducted by the county Department of Public Health), the researchers found that sales of individual servings of booze had a "modest" impact on violent crime.

"However, the researchers did find that as the percentage of cooler space devoted to single-serve containers increased, so did the crime rate," according to a news release.

The news release about both studies was forwarded to CNN.com Tuesday after a piece was published on the site about "violence interrupters" being employed in cities such as Chicago and Baltimore, which are among the 91 cities cited in the first UC-Riverside study.

A University of Chicago study published in 2009 offered some unsurprising findings about the victims and perpetrators of Chicago’s gun violence. They’re often gang-affiliated minorities from low-income families. What may be more surprising is that it cited alcohol - not substance - abuse, depression, anxiety and poor grades in school as other contributing factors.

The emphasis on alcohol over substance abuse is notable because so much violence is linked to the illegal drug trade.

But the study said "analysis of data on Chicago homicides from the Illinois Violent Death Reporting System found that only 3% of victims ages 10 to 24 tested positive for recent cocaine or opiate use. In contrast, 35% of homicide victims had alcohol in their blood at the time of death, often at levels above legal thresholds defined for alcohol intoxication."

Again, that is the victims, not the perpetrators. You can read the whole report here in PDF format.

The UC-Riverside studies appeared in Drug and Alcohol Review, a publication from the Australasian Professional Society on Alcohol and Other Drugs.

One of the researchers, sociology professor Robert Parker, who co-directs the Presley Center for Crime and Justice Studies, said of the findings, "These results suggest that alcohol control can be an important tool in violence prevention."

Parker was more emphatic about the San Bernardino study. Acknowledging that the research had a limited scope, Parker said communities concerned about the impact of selling single servings of alcohol should take action.

"Community interests should dictate local policy, and the potential benefits of reduced violence outweigh any potential harm that the banning or limitation of such sales would create," he said.

What's your take? Is alcohol a devil water spurring our cities to violence? Is it not a factor? Or do you think it's one of many factors contributing to the bloodshed? Let us hear your thoughts in the comment section below.