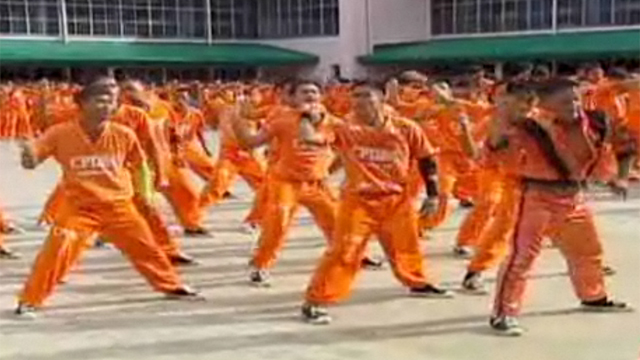 They are a spectacle of choreographed, spontaneous dancing involving masses of people. Flash mobs take precision and planning to pull off, but when successful, they are a sight to be seen. Inspired by a recent flash mob wedding proposal that puts lots of other proposals to shame, we decided to take a look back at some of our favorite flash mob dance routines.

Flash mob proposal –Â Nam Tran pulled out all the stops when he proposed to his girlfriend, TrangÂ Vu. Tran organized a flash mob of students and family members to bustÂ aÂ  move toÂ Frankie Valli's "Can't Take My Eyes Off of You." The whole mob got down on one knee as he proposed on the campus of UCLA, where the couple first met.
[cnn-videoÂ url="http://www.cnn.com/video/#/video/bestoftv/2011/09/29/am-tran-vu-surprise-flash-mob.cnn"%5D

Inmates dance for Jackson – Hardened criminals are probably the least likely group one would imagine bursting into choreographed dance. But inmates at one prison in the Philippines dedicated countless hours learning Michael Jackson's dance moves and even paid tribute to the performer shortly after his death.
[cnn-videoÂ url="http://www.cnn.com/video/#/video/showbiz/2009/06/28/coren.phil.jackson.dancers.cnn"%5D

Mall flash mob matrimony – Shoppers at a Massachusetts mall suddenly found themselves in the middle of a flash mob wedding. Family, friends and shoppers all gathered for the public wedding that was kicked off by a flash mob dance routine. The bride and groom even sent out instructions for the dance moves along with the wedding invitations.
[cnn-videoÂ url="http://www.cnn.com/video/#/video/us/2011/01/07/flash.mob.wedding.whdh"%5D

Last, but not least, we thought we should include one more of our favorite flash mob scenesÂ Â from the ABC's "Modern Family."

"I made a really unfortunate mistake today & obviously I'm embarrassed by it." A Canadian politician has apologizeâ€twitter.com/i/web/status/1â€¦fY
cnni

11:01 pm ET April 15, 2021 RETWEET
A French nuclear-powered submarine severely damaged by fire last year has been saved from the scrapyard -- by cuttiâ€twitter.com/i/web/status/1â€¦Xq
cnni