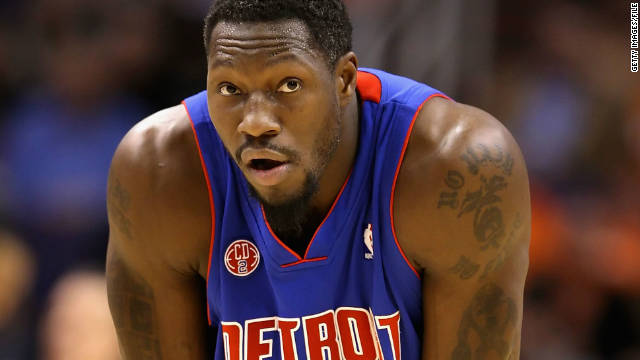 Detroit Pistons center Ben Wallace was charged with a felony concealed weapon count, which carries a penalty of up to five years in prison, after police pulled him over on suspicion of drunken driving over the weekend, police in Michigan said Thursday.

Wallace, a four-time NBA defensive player of the year, was driving erratically when a police officer stopped him about 3 a.m. Saturday in Bloomfield Township, police said. The officer arrested him on suspicion of operating the vehicle while intoxicated.

An unloaded pistol was found in a backpack in the vehicle, Bloomfield Township police said in a news release.

A breath test at the police station showed Wallace had a blood-alcohol content above .08%, the state’s legal limit for driving, police said. The police department declined Thursday to reveal the exact percentage.

Wallace, 37, was charged with unlawful carrying of a concealed weapon and a misdemeanor charge of operating a motor vehicle while intoxicated. The misdemeanor is punishable by a jail term of up to 93 days.

After he was arraigned, Wallace was released to a family member on a $5,000 bond, police said.

Wallace’s agent, Arn Tellem, was unavailable for comment Thursday, according to a representative at sports agency Wasserman Media Group.

The 6-foot-9 Wallace was one of the league’s top defenders during part of the last decade, and has pulled down more than 10,000 rebounds in his 15-year NBA career. The four-time all-star is in his second stint with the Pistons, with whom he won an NBA championship in 2004. He has also played for Washington, Orlando, Chicago and Cleveland.

He is in the final year of a two-year deal with Detroit. Wallace, whose numbers have declined in recent years – he averaged 6.5 rebounds and 2.9 points per game in 54 games last season - is considering retirement, but he has said he is leaning toward returning this coming season, the Detroit Free Press reported.

The scheduled November 1 start of the 2011-2012 NBA season is in doubt with the NBA locking out its players in a labor dispute.

Wallace told The Detroit News over the summer that after he finishes playing basketball, he wants to attend law school to help youths in trouble with the law.

He is scheduled to appear in court for a pre-exam conference Monday, police said.