Severe turbulence contributed to seven injuries - six related to the head, back or neck and one from a severe coffee burn - on Sunday night aboard a Jet Blue flight from San Juan, Puerto Rico, Boston's Logan Airport spokesman Phil Orlandella said.

Flight 852 landed in Boston, its intended destination around 10 p.m., about 20 minutes ahead of schedule, according to the airline's website. 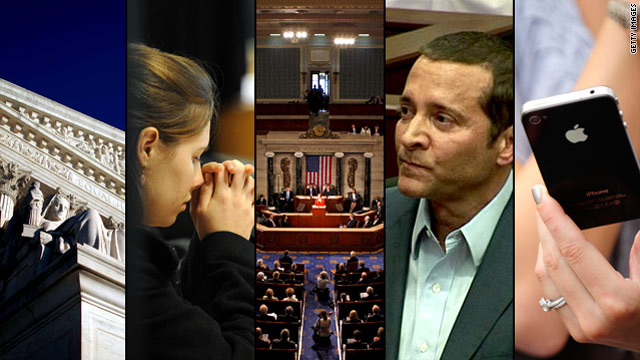 With appeals over the constitutionality of health care reform representing just one potentially explosive topic that could be tackled this year, the U.S. Supreme Court's new term, which begins Monday, may be "the most interesting one in a century," a prominent appellate attorney tells CNN.┬ĀHere is a look at this and other stories that CNN plans to follow this week:

Few doubt that the high court will take at least one appeal relating to the Patient Protection and Affordable Care Act, the signature accomplishment thus far of Barack Obama's presidency, CNN's Bill Mears reports.┬ĀAn eventual Supreme Court ruling can be expected by June, right in the thick of a presidential race.

END_OF_DOCUMENT_TOKEN_TO_BE_REPLACED

Libyan Jew David Gerbi on Sunday hammered down the brick wall blocking the entrance to the rundown Dar Bishi Synagogue in Tripoli on what he called a ŌĆ£historic day.ŌĆØ

Flanked by journalists and curious residents from the neighborhood, Gerbi, dressed in an ŌĆ£I love LibyaŌĆØ T-shirt, collapsed as he yelled, ŌĆ£This is for all those who suffered under Gadhafi."

With a U.S. security contractor accompanying him, Gerbi continued to strike the wall until it was destroyed.

ŌĆ£I could not have done it without the permission of three local sheikhs living in the neighborhood and the protection of the rebels,ŌĆØ Gerbi told CNN as he pointed to the faded Hebrew letters meaning ┬ĀŌĆ£Hear, O Israel" engraved on the wall above the Torah scroll.

The dusty floor of the scarred building was littered with dead pigeons, clothes, flea-ridden mattresses and syringes that may have been left behind by drug users and prostitutes who used to take refuge in the abandoned building, according to the testimonies of the local residents.

ŌĆ£I will paint the walls and restore the building, but will keep it simple and functional because itŌĆÖs a place for God and prayers,ŌĆØ Gerbi said as he mopped the floor.

ŌĆ£I feel proud. My smile is back and my dream is fulfilled, and I want tourists to come see this place in a monthŌĆÖs time,ŌĆØ Gerbi told a room full of journalists.