Israel's health care system has been told to make arrangements to begin vaccinating people over 60 with a third dos‚Ätwitter.com/i/web/status/1‚Ä¶Cu

American Sunisa Lee takes gold in all-around gymnastics at the Tokyo Olympics with Simone Biles cheering from the s‚Ätwitter.com/i/web/status/1‚Ä¶1J

The US economy expanded at a slower rate than expected in the second quarter but still at its fastest pace since la‚Ätwitter.com/i/web/status/1‚Ä¶ff

A 8.2 magnitude earthquake struck off the coast of Alaska, according to preliminary data from the US Geological Sur‚Ätwitter.com/i/web/status/1‚Ä¶0w

American pole vaulter Sam Kendricks has dropped out of the Tokyo 2020 Olympics after he tested positive for Covid-1‚Ätwitter.com/i/web/status/1‚Ä¶td 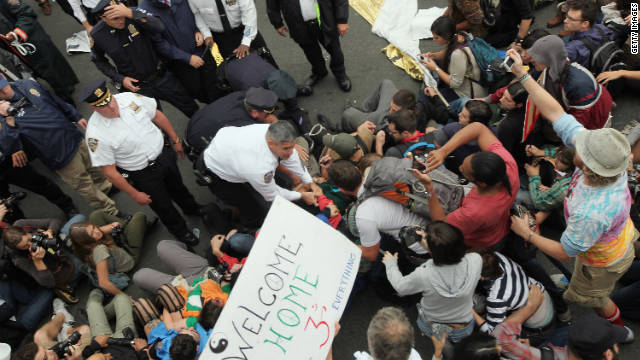 Overheard on CNN.com: What exactly do the protesters want?

The recent "Occupy Wall Street" protests have been a hot topic on CNN.com lately, and the stories about them have prompted a great deal of discussion among readers. Many readers engaged in very heated debates, while many others wondered what the demonstrations were really about.

Some readers have applauded the efforts of the protesters:

carnac95¬Ýsaid, ‚ÄúI think this movement is AWESOME!¬Ý It's about time the left be heard. We are hard working Americans that believe in science, innovation, compassion and taking our country back from the far right that only want "each man for himself." We are ALL in this together!!!‚Äù

JesusLizard said, ‚ÄúWe should all be protesting. Sick of CEOs with their $10 million golden parachutes as they leave corporations that fail to make a profit to go work for another. ¬ÝSick of the billions our government has thrown at the banksters. ¬ÝAnd a $14 trillion debt is unacceptable! Take the protest to Washington!‚Äù

Jones3 said, ‚ÄúI LOVE the protesters.¬Ý This is what this Country is all about.¬Ý I applaud their courage. The nationwide protests in this Country have: given people Civil Rights, stopped the last stupid War we were pushed into (Vietnam) and caused many other good things to come.¬Ý What else can we do with such a messed up Government?‚Äù

Others have indicated uncertainty over what the protesters‚Äô exact aims are:

goingsoon said, ‚ÄúWhat exactly is the goal of the protests?¬Ý "End corruption" is too vague.¬Ý I wonder how many of these protesters are just sitting in, getting arrested with no ability to define the outcome they seek.‚Äù

randaxe said, ‚ÄúI still don't understand the objectives. What do these guys want to happen? More taxes on the rich? More regulation? The purpose has to be clear enough to demand for a particular action versus just saying the economy sucks.‚Äù

One reader expressed his bewilderment with the protests, asserting that the protesters are essentially going nowhere by protesting the various issues at Wall Street:

ExLonghorn said, ‚ÄúThis whole protest thing is baffling to me. American consumers are pushing for ever-lower prices, which push local companies out of business and which push corporations to move costs overseas. ¬ÝThen everyone complains that there aren't enough jobs, and that incomes are stagnant or declining. Well, duh.¬ÝThat's how this whole thing works, folks. Either buy American, or get ready to compete with 2 billion people in Asia who are willing to work harder than you for a tenth of your income.¬ÝIf this protest is about fairness, I humbly submit to you that WASHINGTON is the place to protest."

Other readers attempted to better explain the protesters' cause:

Libertycall said, ‚ÄúWe are for¬Ýtaxation fairness¬Ýand¬Ýfinancial discipline, but not while Wall Street disposes of our income and savings. It's not anarchy, strikes, disorder we're aiming for, because our economy is in a poor shape. ¬ÝWe want to educate people who think they do well only by comparison to starving, unemployed, and desperate. We are on a course of becoming a 2nd¬ÝGreece, and we¬Ýwant to prevent it, while we still can.‚Äù

ddelrose said, "People are speaking up about their frustrations of living in a country that has outsourced their jobs, corporate profits being made off the backs of those that do work, affordable healthcare that is unattainable, a Wall Street that has forgotten about taking care of its investors and politicians that have sent us down the river for their own goals. It is time to speak up...and stand up to what is happening here in America. If we don't, this country will never survive."

10:46 pm ET July 28, 2021 RETWEET
Ex-cop who stormed US Capitol is jailed after buying 37 guns and posting that 'violence' is better than 'peaceful p‚Ätwitter.com/i/web/status/1‚Ä¶hP
sarasidnerCNN

3:03 pm ET July 28, 2021 RETWEET
She asks whether @Simone_Biles and others on the team are getting the support they need twitter.com/susancandiotti‚Ä¶
susancandiotti