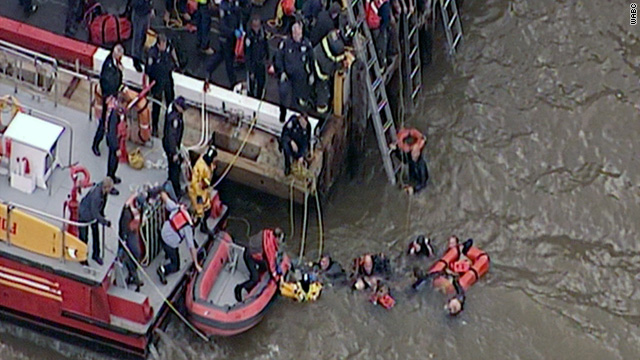 Members of the Coast Guard attempt to rescue those in the East River after a helicopter crashed Tuesday afternoon.
October 4th, 2011
04:29 PM ET

[Updated at 6:00 p.m. ET] New York Mayor Michael Bloomberg told reporters that four out of the five people aboard the helicopter, including the pilot, got out by the time rescuers arrived.

"The fifth person was trapped," he said. That person, a woman, has died, he said. Her identification was pending as authorities sought to notify next of kin, Bloomberg said.

How the accident happened is still not clear, but "the helicopter was inverted, upside down" when rescuers arrived, he said.

Apprently the pilot was "having problems and tried to turn around, but that could change," he said, referring to preliminary reports.

[Updated at 5:39 p.m. ET] New York Mayor Michael Bloomberg is expected to speak shortly about the helicopter crash, CNN's Wolf Blitzer reports. Four people pulled from the East River have been taken to the hospital, he said. One person has died.

[Updated at 5:30 p.m. ET] Coast Guard Chief Petty Officer Don Deleo, who was aboard one of the boats dispatched into the East River after the helicopter crash, told CNN’s Wolf Blitzer that investigators are “basically just trying to figure out what exactly happened.”

Deleo said that there were several agencies on the scene and that the Coast Guard's role  “as of right now is to secure the scene … so that operations continue to recover the helicopter,” he said.

[Updated at 5:01 p.m. ET] Authorities were still investigating the cause of the crash, CNN’s Wolf Blitzer reports.

Rescuers pulled an unresponsive woman  from the water moments ago. TV cameras showed paramedics pushing a woman on a gurney to an emergency vehicle nearby.

[Updated at 4:29 p.m. ET] The search in the East River is still ongoing with divers in the water, CNN producer Julian Cummings reports.

He said that there are at least five to six rescue boats in the waters and the helicopter that crashed is completely submerged.

[Updated at 3:58 p.m. ET] Coast Guard officials say it is not clear whether the incident has left anyone injured.

Dozens of people gathered on the water's edge as emergency officials treated those involved in the crash.

The bottom of the helicopter could be seen floating in the water as rescue boats circled the scene.

In an interview with local affiliate WCBS, a former FDNY Commissioner says the water temperature is approximately 68 degrees.

[Posted at 3:39 p.m. ET] A helicopter has crashed in New York's East River, according to a Coast Guard official.

Images broadcast on CNN affiliate WCBS showed at least three people being towed to shore in a rescue effort.