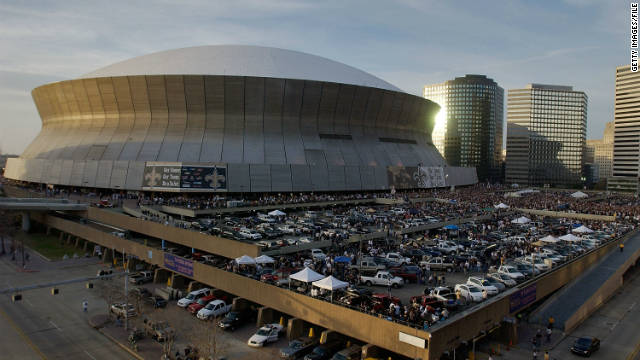 Superdome gets a new name

The Louisiana Superdome - long a holdout against a wave of deals that renamed stadiums across the country - is being renamed the Mercedes-Benz Superdome in a 10-year agreement between the German vehicle manufacturer and the NFL’s New Orleans Saints.

The Saints, who gained the right to market the dome’s name in a 2009 lease extension with the state of Louisiana, announced the deal this week, and a news conference was scheduled for Tuesday afternoon. Financial terms were not immediately released, but a portion of the proceeds is expected to reduce or eliminate state subsidies for the team, the Saints said in a news release.

The state had agreed in the 2009 lease deal to give the team financial incentives through 2025, according to WVUE. But the state let the Saints market the dome’s name with the understanding that much of the proceeds would replace the state’s direct obligation to the team, The Times-Picayune of New Orleans reported.

“This announcement today means we are gaining the partnership of a world-class company while generating savings for Louisiana taxpayers," Louisiana Gov. Bobby Jindal said in the Saints’ news release. “This partnership agreement is estimated to significantly reduce or eliminate taxpayer funding currently spent to support the Saints.”

The move is the latest chapter of the dome’s rebirth after 2005’s Hurricane Katrina hit New Orleans. During that August and September, the Superdome became a scene of misery, with people who had nowhere else to go packed in for days in unsanitary conditions.

Since then, the dome has undergone $336 million in renovations. The stadium, which has been one of the NFL’s and the NCAA’s favorite destinations for championship events since it opened in 1975, is due to host college football’s national championship game and college basketball’s Final Four next year, as well as the 2013 Super Bowl.

“I am thrilled to be able to announce a winning and long-term partnership between the Saints and Mercedes-Benz," Saints owner Tom Benson said Tuesday. "The Mercedes-Benz brand represents the very best in its industry and we believe that it is a perfect fit for this stadium, which as a result of the recently completed renovation project, is now one of the world’s greatest sporting venues.

"We felt strongly it was essential that if we were to offer the name of our building to a company, it would be one that all of our fans and the state of Louisiana would be proud of.  The investment being made by a premier international brand who believes in ‘the best or nothing,’ is a tremendous compliment to all of those who worked so hard to make the stadium what it is today.”

Russia’s “partial mobilization” for its war in Ukraine is off to a chaotic start amid protests, drafting mistaktwitter.com/i/web/status/1…qAJxXXr0
cnni

4:45 am ET September 25, 2022 RETWEET
Director James Cameron shares details on how the upcoming film “Avatar: The Way of Water” is different from the otwitter.com/i/web/status/1…YVO269
cnni

4:30 am ET September 25, 2022 RETWEET
Men aged 18 to 60 across Russia are now facing mobilization as reservists to fight Putin’s war of aggression in Ukrtwitter.com/i/web/status/1…zKoZ
cnni

4:00 am ET September 25, 2022 RETWEET
When the end came neither Roger Federer or Rafael Nadal could hold back the tears cnn.it/3DOxcoR
cnni