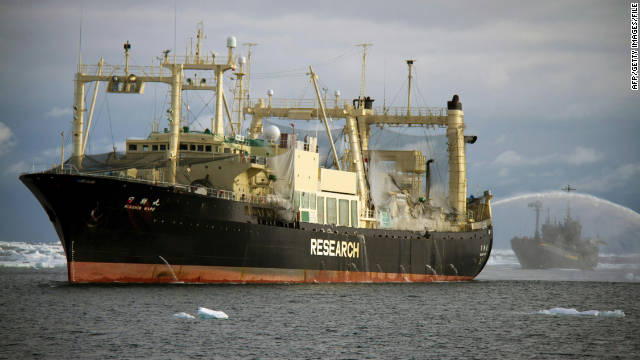 The Japanese whaling research vessel Nisshin Maru is approached by a Sea Shepherd vessel in the Southern Ocean during last season's hunt.
October 4th, 2011
10:29 AM ET

Japan says it will hunt whales in the Southern Ocean this winter and will send a Fisheries Agency ship to guard its whalers against promised intervention by a conservation group.

"The Fisheries Agency will send a patrol boat and take increased measures to strengthen the protection given to the research whaling ships," Fisheries Minister Michihiko Kano said at a news conference Tuesday.

At its annual meeting in July, the International Whaling Commission passed a resolution calling on its member countries "to cooperate to prevent and suppress actions that risk human life and property at sea."

Sea Shepherd claims it saved 800 whales by its actions during last season's hunt. Japanese whalers killed 171 minke whales and two fin whales during the Antarctic hunt, according to IWC figures.

In a statement issued last Friday, Sea Shepherd vowed to take on the whaling vessels again.

“They will have to kill us to prevent us from intervening once again. ... We will undertake whatever risks to our lives will be required to stop this invasion of arrogant greed into what is an established sanctuary for the whales,” Sea Shepherd's leader, Paul Watson, said in a statement on the organization's website. Sea Shepherd will have more than 100 people in the Southern Ocean to block the Japanese whaling fleet, according to the statement.

Kano said Japan wants to continue research whaling with the aim of establishing that whale stocks are sufficient to resume a full commercial hunt in the future, according to Japanese media reports.

"That is why Australia is taking our case in the International Court of Justice to bring to an end Southern Ocean whaling permanently."

Iceland and Norway also conduct whale hunts. Aboriginal whale hunts are permitted in the Danish territory of Greenland, the U.S., Russia, and St. Vincent and the Grenadines.