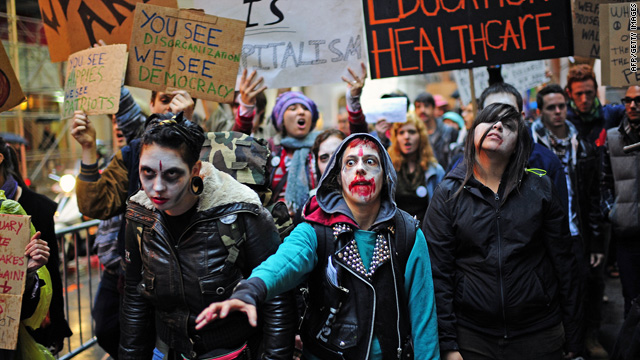 Protesters have been camping out at New York’s Zuccotti Park for more than two weeks.

What started as call to action by Adbusters, a Canadian anti-consumer organization, to protest greed and corruption in Manhattan's Financial District has grown into a catch-all movement of dissent and frustration with current norms.

Overheard on CNN.com: What do the protesters want?

Fueled by social media, the protests have persisted and have begun to attract mainstream attention. By now, the Occupy Wall Street event is attracting a lot of street musicians and tourists.

View a high-resolution gallery of the protests

Those assembled say there is no leadership, but there’s plenty of organization. Food continues to be donated, and protesters take shifts for things such as sanitation duty in which they sweep the park. There are no restrooms, but there are plenty of fast-food restaurants and coffee shops nearby for bathroom breaks.

“It’s the '60s without the drugs,” says Jennifer Jager, who lives near the park and has been watching and visiting the protesters.

“A lot of them who started it are younger than my son,” she says.

CNN’s Susanna Capelouto and Jonathan Binder spent an afternoon with the protesters and sent this audio postcard: