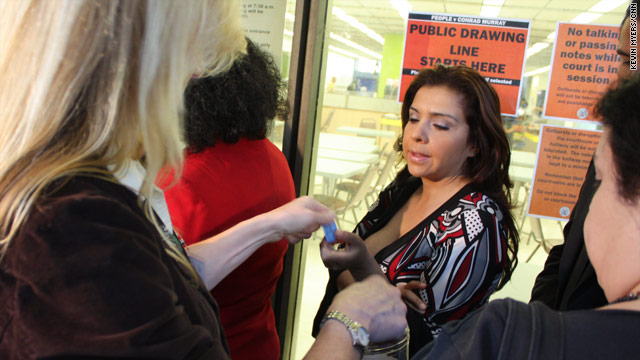 A woman receives a ticket to gain access into the Conrad Murray trial in Los Angeles.
October 5th, 2011
09:32 AM ET

No fist fights here: A methodical approach to get spectators into Conrad Murray trial

At the Conrad Murray manslaughter trial in downtown Los Angeles, there are no all-night lines, no fistfights, no Sharpie system like the one used by would-be spectators during Casey Anthony’s murder trial.

Trial-watching is a more orderly affair in L.A., which has a long history of sensational courtroom drama.

Spectators start showing up around 7 a.m., and it’s all over by 7:30. Unlike the Casey crowd, who were fighting over a hot ticket into the trial, these folks don’t brawl.

Why not? It’s not that Michael Jackson’s fans, who make up the vast majority of the would-be spectators, are peace-loving folks. They’re just as emotional about the case as the Casey clatchers were.

There’s just no point to acting out.

In Orlando, it was pretty much first come, first served for 50 courtroom seats, and conflict often arose over the varying definitions of “first.”

It got downright scary the night one woman showed up and started her own line, declaring herself No. 1. That did not go down well with the 50+ others who’d passed a Sharpie around to brand themselves with their numbers.

In Los Angeles, there are far fewer seats for the public, so you’d think the law of supply and demand would make the competition more intense. Ah, but L.A. has its lottery system. No matter when you show up, you’re given a ticket, and the other half is tossed in a bowl. The winning numbers are pulled out at random – so far six to nine a day.

If only they’d thought about that in Orlando, they might not have had to call the cops so many times.

“We’ve been doing this a while,” said one court spokeswoman, who offered a knowing smile and nod, but not her name.
nys lottery