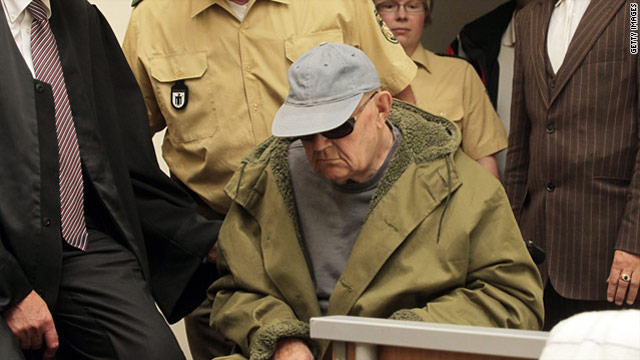 (Correction: An early version of this post included a reference to a "Polish death camp." It should have said "a Nazi death camp in Poland." CNN regrets the error.)

German prosecutors have reopened hundreds of investigations into suspected Nazi death camp guards, according to the associate dean of the Simon Wiesenthal Center, the Los Angeles-based Jewish human rights organization founded by a camp survivor.

"Though this is late in the game, and those who would be targeted are very old, this is tremendously important," said Rabbi Abraham Cooper. "This signals that there is a new generation of prosecutors who want to take a fresh and serious look, and it means that the larger German bureaucratic machine is paying attention to the importance of finding these criminals."

Germany is making a move now because of an unusual and opportune precedent established by the May 2011 conviction of John Demjanjuk, a guard at a death camp, Cooper explained. There was no direct evidence tying Demjanjuk to crimes, but prosecutors won a conviction on more than 28,000 counts of accessory to murder by demonstrating that he worked at the camp where deaths occurred.

Demjanjuk was deported from the United States in 2009 to stand trial in Germany, appearing in court wearing dark eyeglasses and a baseball hat. Demjanjuk has filed an appeal of his conviction. Because of his age and the unlikely flight risk he posed, he was freed but returned to prison in May, prompting German prison officials to search for a short-term nursing home for him.

"Practically speaking, you might have once had thousands of cases, but now you have maybe hundreds [of suspects]," Cooper said. "Factor in advanced age and illness, and then [consider] whether they [suspects] would be capable of defending themselves at trial. The number goes down significantly [of those who could be prosecuted]."

Not all prosecutions have been successful. In July, a Hungarian court acquitted a 97-year-old - accused of being one of the world's most wanted Nazi war suspects - because of lack of evidence.

But even a few convictions will be symbolically important, the rabbi said, and reinforced the words of Simon Wiesenthal who escaped from a camp in 1943. Wiesenthal lost 89 members of his family in the Holocaust, according to the Center's website. "Each trial is an inoculation against hatred," Cooper repeated Wiesenthal's words.

Cooper said that the Wiesenthal Center has a researcher based in Germany dedicated to tracking down former Nazis who communicates with German authorities. And the Center's head Nazi-hunter, Efraim Zuroff, is conducting a campaign called "Operation Last Chance" targeted toward rooting out Nazis in hiding. Read a CNN.com profile of Zuroff.

The Center, however, is not working with German authorities on the newly opened investigations.