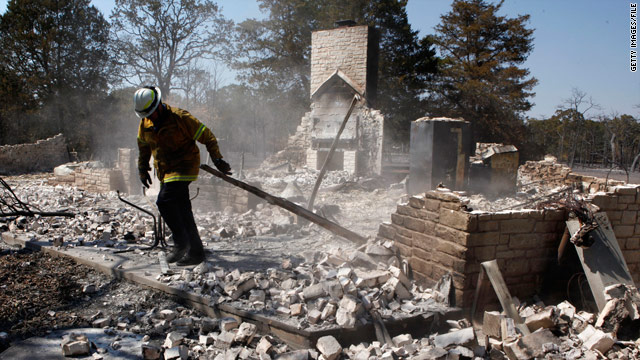 A firefighter works among the rubble of a Bastrop County, Texas, home in September.
October 5th, 2011
06:01 AM ET

Texas fire: Firefighters in Bastrop County, Texas, continue to battle on Wednesday a blaze that sprang up Tuesday near where fire destroyed more than 1,500 homes in September.

About 1,000 acres were burning with multiple street evacuations, according to Sissy Jones, spokeswoman with the Bastrop County sheriff's office.

"We have had to evacuate 30 homes in the area," John Nichols, public information officer with the Texas Forest Service, told CNN. A highway in the area was closed because of the fire, he added.

The area that was burning is in the northeast portion of the county near the town of McDade, Texas. The cause of the fire was unknown, authorities said.

"These young people on Wall Street are giving voice to many of the problems that working people in America have been confronting over the last several years," Larry Hanley, international president of the Amalgamated Transit Union, which has 20,000 member in the New York area, told CNN.

Meanwhile, a Twitter account called Occupy Boston mentions a city-wide college walkout there Wednesday. The Massachusetts Nurses Association says "hundreds" of the city's nurses will rally with the Occupy Boston protestors on Wednesday. The Nurses Association says the protest will be part of the opening day activities for a national nursing convention being held in Boston.

Halloween costumes: Charlie Sheen, the former star of TV's "Two and a Half Men" who was fired from the popular sitcom earlier this year, is the most popular Halloween costume for 2011, CNNMoney reports.

As for kids' costumes, expect to be seeing a lot of Angry Birds on your doorstep on Halloween night, the report says.

"Haley and the other Republicans eying the White House are facing one very big hurdle: former President Donald Trumâ€twitter.com/i/web/status/1â€¦yK
cnni

5:20 am ET June 25, 2021 RETWEET
Prime Minister Imran Khan is being criticised after blaming a rise in sexual violence in Pakistan on women wearingâ€twitter.com/i/web/status/1â€¦Fj
cnni

5:10 am ET June 25, 2021 RETWEET
A new and slightly changed version of the Delta coronavirus variant is spreading in a number of countries includingâ€twitter.com/i/web/status/1â€¦3e
cnni

4:45 am ET June 25, 2021 RETWEET
At least 99 people are unaccounted for after a building partially collapsed in Surfside, Florida. At least one peâ€twitter.com/i/web/status/1â€¦MS
cnni

4:34 am ET June 25, 2021 RETWEET
It looks like dessert is on the menu for breakfast. Eat your way through Rome on the CNN Original Series, Stanleyâ€twitter.com/i/web/status/1â€¦6E
cnni