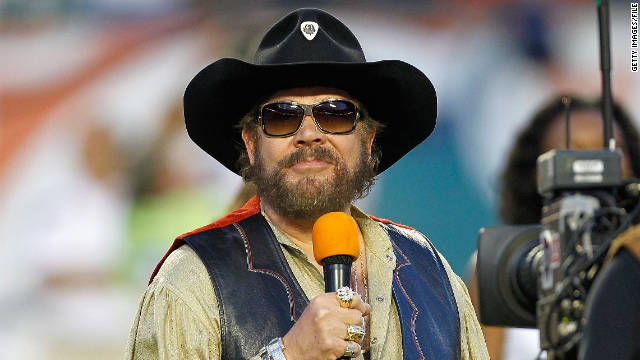 "We have decided to part ways with Hank Williams, Jr. We appreciate his contributions over the past years," a statement on ESPN's site said. "The success of Monday Night Football has always been about the games and that will continue."

Williams gave a very different statement: "After reading hundreds of e-mails, I have made MY decision. By pulling my opening Oct 3rd, You (ESPN) stepped on the Toes of The First Amendment Freedom of Speech, so therefore Me, My Song, and All My Rowdy Friends are OUT OF HERE.  It's been a great run."

On Tuesday the singer had apologized Tuesday for his remarks which resulted in "Monday Night Football" pulling his popular musical introduction from this week's game.

"I have always been very passionate about politics and sports and this time it got the best or worst of me.

"The thought of the leaders of both parties jukin' [sic] and high fiven' [sic] on a golf course, while so many families are struggling to get by, simply made me boil over and make a dumb statement, and I am very sorry if it offended anyone. I would like to thank all my supporters. This was not written by some publicist," Williams wrote.

Williams made the comparison on Fox News this week when he was asked about Obama and House Speaker John Boehner, a Republican, playing on the same team in a June golf game.